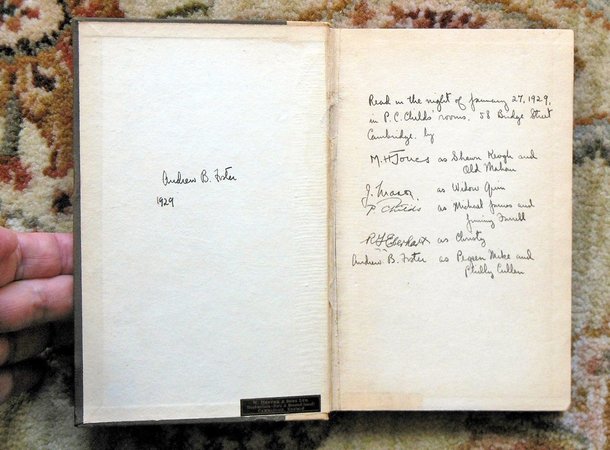 This is a book of the play PLAYBOY OF THE WESTERN WORLD with a HANDWRITTEN INSCRIPTION and SIGNATURES as detailed below.

In 1929 JAMES MASON was a student at CAMBRIDGE UNIVERSITY. This book details a READING of PLAYBOY OF THE WESTERN WORLD that was performed by JAMES MASON along with other notable FELLOW CAMBRIDGE STUDENTS - RICHARD GORHAM EBERHART, ANDREW B. FOSTER and Two Others. The Reading was done in a CAMBRIDGE STUDENT'S DORM ROOM.

The DATE and DETAILS of this AMAZING STUDENT READING were written down on the front endpapers of the book that was used for the reading. It appears that the details were manually recorded by Andrew B. Foster, whose signature and the date 1929 is on the front pastedown.

The book is SIGNED by ALL THE READERS / PERFORMERS beside the handwritten name of the character (or characters) they were reading / performing.

The FIVE SIGNATURES are of JAMES MASON (the famous actor), M. H. JONES (who is?), P. C. CHILDS (who is?), RICHARD G. EBERHART (noted poet), and ANDREW B. FOSTER (noted diplomat).

James Mason, Richard G. Eberhart, and Andrew B. Foster, all attended Cambridge University in 1929. The information showing their dates of attendance can be found in numerous biographical information about them on the Internet. I assume that P.C. Childs and M.H. Jones were fellow students.

James Mason graduated from Cambridge University with a degree in Architecture. It is said that in his free time he sometimes partook in acting related activities, but nothing serious because he did not intend to be an actor.

ABOUT THE BOOK that has the Inscription, Signatures and Details of The Reading on the front free endpapers: Hardcovers, paper covered boards, 4.5"x7", 132 pages. Published by Maunsel & Roberts Ltd., Dublin & London, reprint edition, 1921.

GOOD condition, spine is toned, spine lettering is faded but legible, small bookseller's label at the bottom of the front pastedown (W. Heffer & Sons Ltd. / Booksellers New & Second-hand / Cambridge, England), front inner hinge is cracking but holding well, some upper page corners have been turned down, a couple signatures are split at the gutter where the book was opened very wide (but still holding well); overall just lightly used and still tight, bright, and clean.

SCARCE - this is the EARLIEST Acting Related Signature of JAMES MASON that I have ever seen. Even before he knew he was going to be an actor!