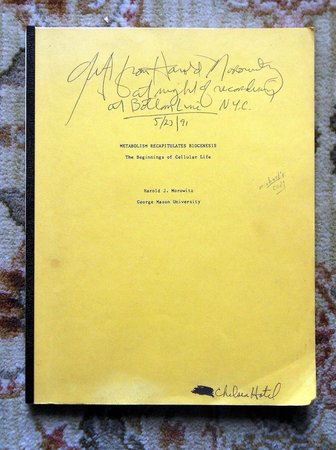 HAROLD J. MOROWITZ - SIGNED INSCRIBED DRAFT COPY of METABOLISM RECAPITULATES BIOGENESIS - THE BEGINNINGS OF CELLULAR LIFE. DRAFT COPY. No Publisher or Publication Date. VeloBound in Yellow Paper Covers, plain white copy-machine printed papers, 8.5" x 11", pages numbered in numerous sections (the draft was being put together into a complete work), approximately 250 total pages. SIGNED, INSCRIBED and DATED on the Front Cover: "Gift from Harold Morowitz / at night of recording / at Bottom Line N.Y.C. / 5-23-91". Though not named in the inscription, this Draft was inscribed by Morowitz to the Poet MICHAEL McClURE. McClure was a longtime admirer of Morowitz's work, and Morowitz was an amateur poet and admirer of McClure's poetry. They corresponded frequently, especially during the early 1990s (refer to the Morowitz archives, held at George Mason University). Apparently this DRAFT of one of Harold Morowitz's most important works, was Inscribed to Michael McClure during a recording of some sort that they did together at the Bottom Line Nightclub in New York City on May 23, 1991. I cannot find information about the recording of this performance, perhaps it was never released. However, it is well reported that Michael McClure held numerous performances at the Bottom Line, often in concert with others (e.g. with Ray Manzarek - keyboardist of THE DOORS), so it is not unlikely that he did a performance in conjunction with Harold Morowitz. When McClure was in New York City he stayed at the Chelsea Hotel, a favorite of Beat Poets. "Chelsea Hotel" is handwritten at the bottom of the front cover, perhaps written by Morowitz as a delivery address for McClure. Written in pencil in another hand is "McClure's copy", also on the front cover. VERY GOOD condition: There is some rubbing and scraping to the bottom margin of the front cover, a small area is inked out prior to "Chelsea Hotel" on the front cover (perhaps the beginning of an actual street address?), the front cover has some corner creases and light edge wear; otherwise tight, bright, clean and unmarked. A SCARCE DRAFT COPY of an IMPORTANT WORK by a great BIOPHYSICIST - SIGNED and INSCRIBED IN 1991 to a great POET. (The final BOUND BOOK was published by Yale University in 1992, with the title repositioned as: "BEGINNINGS OF CELLULAR LIFE - Metabolism Recapitulates Biogenesis"). Find much more about HAROLD MOROWITZ and about the poet MICHAEL McCLURE on Wikipedia.