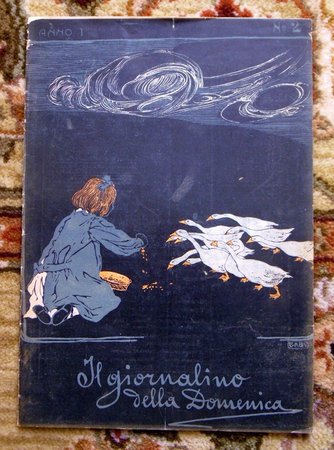 IL GIORNALINO DELLA DOMENICA. Vamba, Luigi Bertelli, 1906. Anno 1, N.2. Luglio (July) 1906. (Rare Second Issue of this Publication.) Important and Influential Early Italian Children's Magazine. Text in Italian. Thin magazine, covers illustrated in color, inner pages in b&w, side stapled (single, large staple in the middle of the spine fold), 8"x11", 17 numbered pages plus 3 pages of ads (2 at the front, 1 at the rear). TEXT IN ITALIAN. GOOD condition. There is a vertical crease down the middle from where the issue was probably folded in half, perhaps to fit in a pocket; there is some edge creasing and wear including a few small closed tears; the inner pages and rear cover have toned; still a solid, complete, clean copy. SCARCE SECOND NUMBER of this ITALIAN CHILDREN'S JOURNAL. From Wikipedia: ******IL GIORNALINO DELLA DOMENICA was 'the prototype of the modern periodical for children in Italy'. The magazine which was a high-quality publication was published between 1906 and 1927. Founded in 1906 in Florence by 'Vamba', a pseudonym of the journalist Luigi Bertelli (1858 - 1920). Il giornalino della Domenica adopted an avant-garde style and a tone markedly patriotic and irredentist. Publication was initially weekly and its cover price of 25 centesimi made it distinctly more expensive than its rival the Corriere dei Piccoli which was launched two years later. IL GIORNALINO DELLA DOMENICA targeted urban middle-class children. Its goal was not teach them to write or read, but to recognize their fantasies and desires through stories, poems and essays. Contributors included many of the most prominent Italian writers of the period as well as leading exponents of the graphic arts. Letters and other contributions from its young readers were also sought; those who responded included the daughters of Italo Svevo and Benito Mussolini. The magazine ceased publication in 1927.******