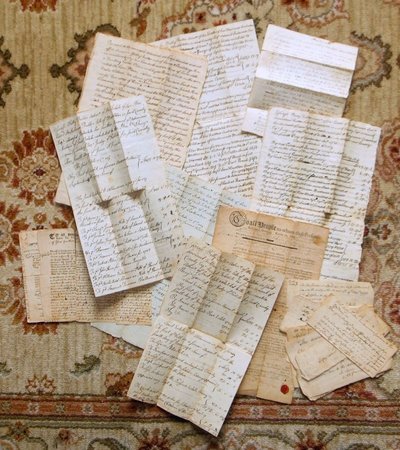 HANDWRITTEN DOCUMENTS & PAPERS of the FULLERS of MIDDLETON, MASSACHUSETTS - from the COLONIAL, REVOLUTIONARY and POST-REVOLUTIONARY PERIOD, 1750-1823. Important for their Historic and Genealogical information. The papers are FULL of GENEALOGICAL INFORMATION related to the FULLERS and related families, including:

THOMAS FULLER who came to Middleton from Woburn in 1663. He settled in a house on Old South Main Street. He was a blacksmith and iron worker. He died in 1698. BENJAMIN FULLER. Fifth son born in 1689. Died in 1754. BENJAMIN FULLER, JR. ARCHELAUS FULLER. Eldest son of Benjamin Fuller Jr. Born in 1727. Built a house in Middleton about 1759 (now knows as the "Daniel Fuller House"). Was a COLONEL IN THE REVOLUTIONARY WAR, 1775-76. Died in 1776 as a result of smallpox he got during the Revolutionary War. DANIEL FULLER, Esq. Educated at Philips Andover in 1785. Married SALLY ETSY in 1798. JEREMIAH FULLER. Born 1809, died 1855. Married Eunice Pike. Lived with his sister SOPHONIA, a school teacher. and MANY OTHERS.

There is much about the early FULLER FAMILY of MIDDLETON, MASSACHUSETTS to be found on the Internet.