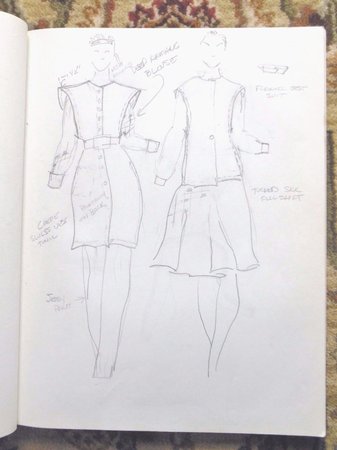 FASHION DESIGNER'S SKETCHBOOK. Sketchbook has hard black covers with 11" x 13" sketch paper bound in. Approximately 65 pages have either writing or sketches, mostly sketches with associated notes. Most of the sketches are on only one side of the sheets, with the back sides blank. The sketchbook was most likely owned by a fashion designer who worked for the firm of GIBSON PALERMO of San Francisco. Laid in are two SIGNED black and yellow crayon fashion drawings, one is Inscribed "To Mr. Palermo" and dated 1983. Unfortunately I cannot make out whose signature it is, and that signature is the only clue I could find as to who this sketchbook actually belonged to. Also laid-in are two Gibson Palermo photo cards, one announcing its Spring Summer '81 collection, the other simply stating "Gibson Palermo" beneath a

close-up of a blazer. Again, the sketches in the book appear to be by one of the Company's fashion designers. These are early sketches, in pencil. They certainly appear professional in nature. The sketches seem to be from 1982-83 (there are dates on a couple pages) and seem to be in preparation for an upcoming season. Sketches include early studies for a Vest Dress, Jersey Sweater, Pattern Silk, Cumberbund in Wool Crepe, Long Camisole, Cashmere and Jersey Strapdress, and much, much more. Condition: The covers are well worn and coming loose and the binding is shaky, but the covers are still hanging on. The sketchbook pages are very nice, clean, with pencil drawings and annotations that are clear. The laid in signed sketches are creased and worn, especially around the edges. The sketchbook provides a nice look into the thought process of a high-end fashion designer of the early 1980s.