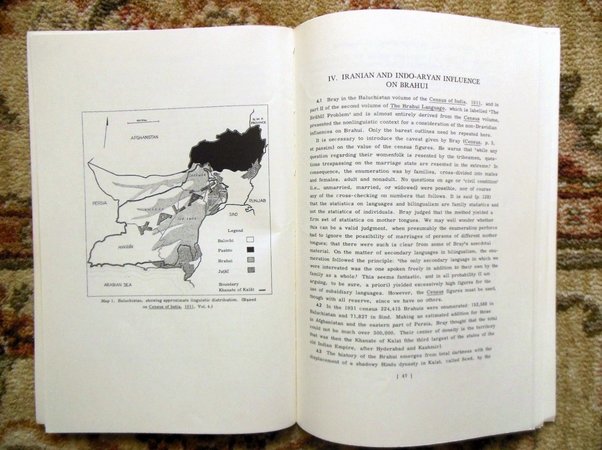 BRAHUI AND DRAVIDIAN COMPARATIVE GRAMMAR, by M. B. EMENEAU (Murray Barnston Emeneau). Publications in Linguistics, Volume 22. Published by the University of California, Berkeley and Los Angeles, 1962. First Edition. Softcovers but lacking its covers / wrappers, 6.75" x 10.25", xi + 91 pages. Condition: Lacking its wrappers, as noted above, otherwise complete. Pages show general signs of handling but are still tight, bright, clean and unmarked. An important study by a renowned Dravidian linguist. About the BRAHUI Language (from Wikipedia): ******Brahui is a Dravidian language spoken by the Brahui people in the central Balochistan region of Pakistan and Afghanistan, and by expatriate Brahui communities in Qatar, United Arab Emirates, Iraq, and Iran. It is isolated from the nearest Dravidian-speaking neighbor population of South India by a distance of more than 930 miles. Kalat and Mastung districts of Balochistan are predominantly Brahui-speaking. Brahui is the only Dravidian language which is not written in a Brahmi-based script; instead, it is written in Arabic script.******