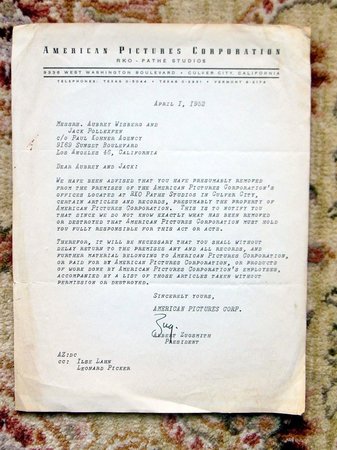 Letter by ALBERT ZUGSMITH, PRESIDENT of AMERICAN PICTURES CORPORATION / RKO - PATHE STUDIOS, on Company Stationery, ACCUSING its CO-FOUNDER, AUBREY WISBERG, and a FILM PRODUCER, JACK POLLEXFEN, of CORPORATE THEFT. Dated April 1, 1952. On 8.5" x 11" Company Stationery with Its Letterhead at the top. Watermarked rag paper. Typed letter, typed on the front side only, typing is tangible on the backside. SIGNED by Albert Zugsmith, President of American Pictures Corp. One of the coolest, insider, back-stabbing, Hollywood Film Industry, letters that I have ever seen! Creasing and toning, primarily to the margins, two horizontal folds where the letter was probably folded to fit into an envelope (no envelope present), overall still GOOD condition, certainly suitable for framing! You can read about ALBERT ZUGSMITH, AUBREY WISBERG and JACK POLLEXFEN on Wikipedia (they each have their own page).