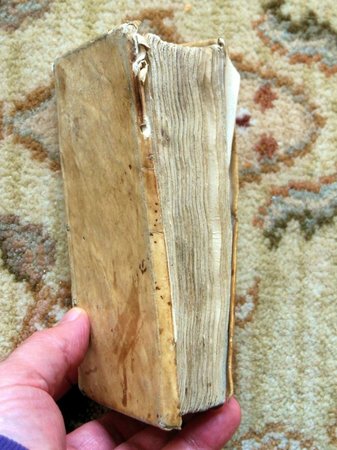 LES DERNIERS EFFORTS DE L'INNOCENCE AFFLIGÉE - Volume I and II (bound together in this single book), par (PIERRE JURIEU). A LA HAYE : CHEZ ABRAHAM ARONDEUS, Marchand Libraire au Palais, a l'Enseigne du Roy de France, M. DC. LXXXII (1682). This book almost immediately became an important and controversial work that was quickly reprinted, most notably by Chez David Dufour, Ville Franche, who republished the book in several editions also in the year 1682. VELLUM BOUND, small format 3" x 5.25", two parts in this one book (complete), pagination: [4], 182; [2],160 pages. I collated both Volume I and Volume II page-by-page with the copy of each volume held in the Rare Book

Holdings of the Bavarian State Library, Germany. Those rare copies were digitized in 2010. Condition: The vellum covers are yellowed with age, stained, worn through along some of the edges, are peeling at the folds and edges, and have a 1/2 piece missing at the bottom of the spine; the inner rear hinge has completely split, exposing the inner binding and meaning that the vellum covers are almost disbound (a strong tug would remove them from the inner bound text. There is interesting very early writing, in French, on the front pastedown, the rear free endpaper, and on a laid-in slip of paper; there is also a signature on the very last page of text of Volume II. There is a handwritten date of 1712 on the front pastedown, but I don't know if all the writing is from that time or not. The front and rear pastedowns are soiled, creased, and have large tears. The first page of Volume I is soiled, has a dime-size edge chip (not affecting text), a couple hand-written letters "m" and "o.u." and a signature. Overall the inner pages are very nice - light foxing, mostly on the first and last few pages, some soiling, overall still tight, bright, clean and unmarked. Complete TRUE FIRST EDITION / FIRST PRINTING (Published by Chez Abraham Arondeus, La Haye) of this IMPORTANT WORK by PIERRE JURIEU. This true first printing is SCARCE, with copies only to be found in a few rare book rooms of Major Universities and National Collections (see WorldCat).