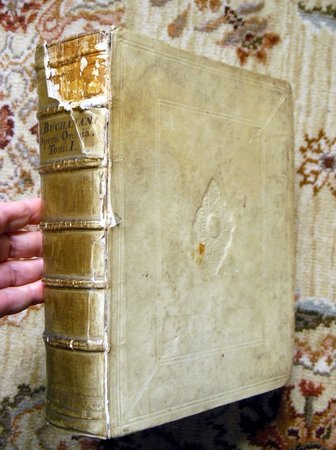 Georgii Buchanani [George Buchanan]. OPERA OMNIA, HISTORICA, CHRONOLOGICA, JURIDICA, POLITICA, SATYRICA & PEOTICA. Volume One only (of Two Volumes). Lugdunum Batavorum (Leiden), Johannem Arnoldum Langerak (Johan Arnold Langerak), MDCCXXV (1725). Early edition. (the printer Joh. Arnold Langerak was active from 1710-1750). Contemporary VELLUM BINDING, blind-stamped design and framing on the front and rear covers, 5 raised spine bands, handwritten title on spine, 8" x 10". Pagination: [140] prelim pages including life of George Buchanan, 732 Text, [96] Index, [6] prelims to JURE REGNI Apud Scotos, 116 Text. Illustrated with an engraved frontispiece and a fold-open chart. CONDITION: The Vellum covers are split at the folds but holding well with the five cord bindings; the vellum from the top spine compartment has broken off (i.e. is missing), there is an edge piece of vellum missing from the second compartment (the compartment with the hand-written title) that partially affects one letter, and there is some cracking to the spine vellum; the front and rear vellum covers have some soiling, age toning, and spotting; overall the vellum covers show wear, but are still quite attractive in a Harry Potter Hogwarts Library sort of way. Internally very nice, some age foxing, corner creasing, toning and soiling here and there throughout, but overall the inner pages are complete, tight, bright, clean and unmarked. A quite impressive copy. An Important 289 year-old book by an Renowned SCOTTISH Writer and Scholar. With its vellum binding, the book looks impressive on and off the shelf. A snippet about GEORGE BUCHANAN (from a much longer Wikipedia article): ******George Buchanan (February 1506 - 28 September 1582) was a Scottish historian and humanist scholar. Brown says that Buchanan was "the most profound intellectual sixteenth century Scotland produced." His ideology of resistance to royal usurpation gained widespread acceptance during the Scottish Reformation. Brown says the ease with which King James VII was deposed in 1689 shows the power of Buchananite ideas.******