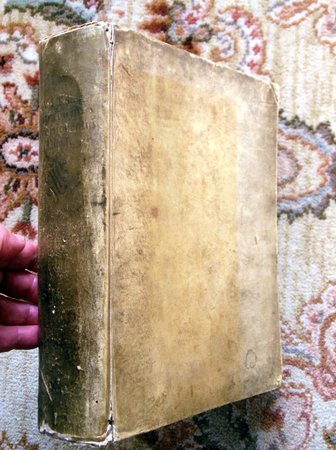 Jacobi Manzoni / Giacomo Manzoni, was an important Italian book collector. Manzoni was born in 1816 in Lugo, Romagna, into an aristocratic family. He was involved in many aspects of Italian life, but his main pursuit, which he began at a very early age, was collecting books and manuscripts. At the time of his death in 1889, he left a library of approximately 25,000 rare and highly valued volumes. This is one of those volumes. Condition: The Vellum Covers have yellowed and toned, the spine has substantially darkened, there is some peeling and cracking to the covers' edges and 2" of splitting at the top and bottom of the spine folds, the edges and spine ends are shelf worn and rubbed through at places, nonetheless the covers are solid, doing their job well, and attractive in a Harry Potter's Hogwarts Library way. There is a bit of writing on the endpapers, a small bookplate to the front pastedown (as noted above) and a small label with numbers to the rear pastedown;

the front free endpaper is creased, the title page has some edge wear and small edge chips, there is light toning and foxing throughout, overall the inner pages are very nice - tight, bright, clean, and unmarked.