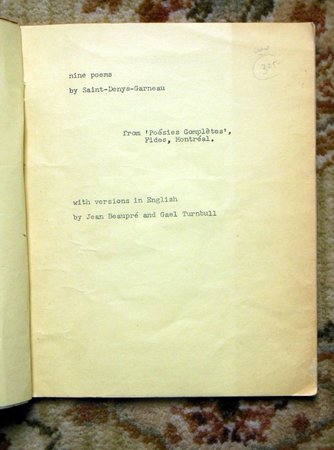 SAINT-DENYS-GARNEAU : NINE POEMS. With Versions in English by JEAN BEAUPRÉ and GAEL TURNBULL. POETRY by Saint-Denys-Garneau. Translated by Gael Turnbull and Jean Beaupré. Privately Published: IROQUOIS FALLS (Northern Ontario, Canada), for Private Distribution, Summer, 1955. From the Colophon Page (the last page): "mimeographed at Iroquois Falls, Ontario, for private distribution, Summer, 1955." Paper wrappers (only front cover is present - the spine and rear cover are lacking), front cover is hand titled "Garneau"; yellow inner pages, 7" x 8.5", side-stapled, 24 unnumbered pages. VERY LIMITED EDITION. One of four chapbooks / booklets produced by Gael Turnbull and Jean Beaupré in Iroquois Falls, Canada, reportedly in limited editions of around 120 copies. These chapbooks are sometimes thought to have been published by the Contact Press, but that is not the case, Contact only distributed some of the copies (and its stamp is on the title page of those copies it distributed). (Refer to Gnarowski: Contact Press, first published in Montreal, 1970). Condition: Rear wrapper lacking, as noted above; the front wrapper has some very light red splotches (perhaps offsetting from something red having been laid on to it?), the front wrapper is worn with chipping, small closed tears, and soiling along all its edges; the title page has offsetting to its front margin, the last page has wear and creasing along its stapled edge; there are a couple pencil margin marks, and there are general signs of handling. Despite its flaws, this is a bright, clear copy of this VERY SCARCE Canadian Publication. Provenance of the late Peter Howard of the now gone Serendipity Books of Berkeley, California. The first page has Peter's private code and a circled price of $325. Peter was known for his wonderful, scarce books, especially poetry books. He was also known for his often outrageously high prices.