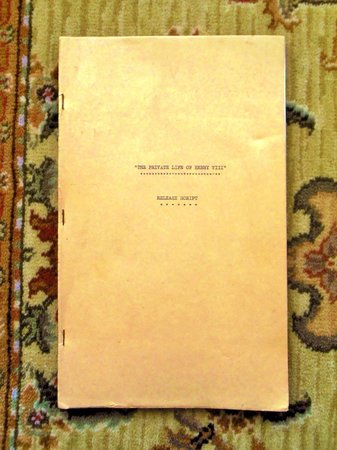 ORIGINAL RELEASE SCRIPT / SCREENPLAY of THE PRIVATE LIFE OF HENRY VIII, Starring CHARLES LAUGHTON, Directed by ALEXANDER KORDA, Written by Lajos Biro. This Original "Release Script" is undated, but such documents, created to archive every shot, scene and line of dialogue in the finished film, were normally produced just after a film was "in the can" and just before or just after the finished film was released. The film was Produced and Shot in Britain by London Film Productions Limited, and was Released in the U.S. by United Artists in August 1933, so this "Release Script" would be circa 1933, though it is possible this final record of the film was produced later. Original mimeographed pages in tan paper covers, title typed on to front cover, mimeographed on 8" x 13" paper, mimeographed on one side only on fine paper that is watermarked "64 Mill / Hard Sized", bound with 3 staples at the left margin, 46 pages. Contains 2 pages of credits, followed by a reel by reel, shot by shot continuity of the film, followed by a reel by reel dialogue continuity of the film. Release Scripts and Continuity Scripts (Continuities) were an important part of the film industry in its early days. They were typically created just before or just after a film was released, in order to create a written "copy" of the film. A good "Continuity" provides a transcription of every shot, scene and piece of dialogue, as it occurred in the finished film, something that could obviously not be known until a film was completed and "in the can". Continuities were created both for copyright protection and for an original

"record" of a film, thus a copy might be kept by the studio and by the studio's legal department. Many early films easily degenerated, and many others were wiped out to recover their silver. A true continuity script was therefore often the only archived, shot-by-shot, scene-by-scene, word-by-word, record of many early films. One could, conceivably, reconstruct a film from a Release Script or Continuity. GOOD condition, the rear cover is disbound, some of the latter pages have pulled from the upper staple, the staples are rusted, the front cover has some edge wear, creases and light soiling, the inner pages are very nice, a spot of foxing here and there, one page is folded at its lower corner (the paper was cut incorrectly, not affecting text), the mimeographed printing runs somewhat dark and light but is always clear and fully legible.