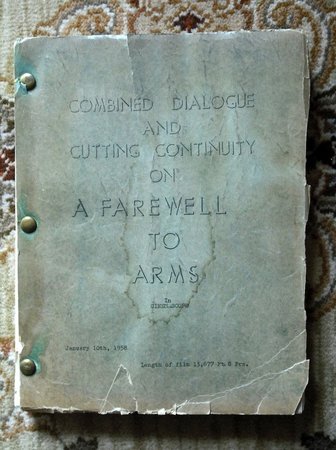 A FAREWELL TO ARMS (the 1958 Motion Picture) - COMBINED DIALOGUE AND CUTTING CONTINUITY SCRIPT - "In Cinemascope". Continuity Script dated January 10th, 1958. Length of the film 13,677 Ft. 8 Frs. A SELZNICK STUDIOS FILM of ERNEST HEMINGWAY'S NOVEL. Printed gray paper covers, 8.5" x 11", side-bound with 3 brass brackets, pages numbered consecutively and by reel, 238 pages / Reel 18 Page 5. Pages printed on one side only. The front and rear covers are stained from a spill, the first 2 pages are also heavily stained, the next ten or so pages have staining to their top margin, then the stain disappears. The covers are well worn, have a couple 3" closed tears, lots of edge chips and closed edge tears. Internally, after the staining on the beginning pages, all the pages are bright and clear. SCARCE Reel by Reel Dialogue and Cutting Continuity to A FAREWELL TO ARMS, the film based on Hemingway's Masterpiece. Continuities (Continuity Scripts) were an important part of the film industry in its early days. They were typically created after a film was "in the can", but before it was released, in order to create a written "copy" of the film. A good "Continuity" provided a transcription of every shot and scene in detail as it occurred in the finished film, something that could obviously not be known until a film was completed. Continuities were created both for copyright protection and for a "record" of a film. Many early films easily degenerated, and many others were wiped out to recover their silver. A true continuity script was therefore often the only archived, scene-by-scene, record of many early films. Provenance of the late Peter Howard, and his now shuttered Serendipity Books, Berkeley, California. Peter was a long time member, and at one time President, of the Antiquarian Bookseller's Association of American. He was very well known in the antiquarian book arena. Years ago Peter bought much of the archives of Selznick Studios,. This continuity script is from that archive.