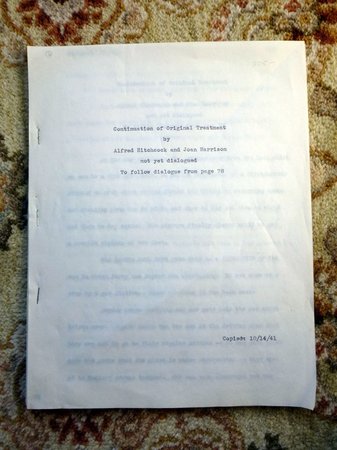 Carbon Typescript of the "CONTINUATION OF ORIGINAL TREATMENT". The was the treatment for the, yet unnamed, Hitchcock Film SABOTEUR, that was released on April 22, 1942. This Film Treatment was written by ALFRED HITCHCOCK and JOAN HARRISON. It is dated 10/14/41. SABOTEUR originally had some trouble getting produced. Hitchcock was under contract to Selznick Studios, but Selnick passed on the film. Hitchcock had a treatment that he provided to Universal. Universal wanted a longer treatment, which is where this "Continuation of Original Treatment" comes in. Universal agreed to finance the film, but the budget was reduced and the production timetable was substantially shortened. Filming began shortly after the attack on Pearl Harbor. At the time of this treatment, the film's title had not yet been finalized. Carbon sheets, 8.5" x 11", three staples on the left side, 38 pages (numbered 92-129) plus a cover page. Hitchcock story "treatments" are VERY SCARCE, especially his earlier story treatments. About JOAN HARRISON (from Wikipedia): ******Joan Harrison (26 June 1907 - 14 August 1994) was an English film producer and screenwriter. Born in Guildford, Surrey, Harrison studied at St Hugh's College, Oxford and reviewed films for the student newspaper. She also studied at the Sorbonne. In 1933 Harrison became the secretary of Alfred Hitchcock. Eventually she began reading books and scripts for him and became one of Hitchcock's most trusted associates. When Hitchcock moved to Hollywood in March 1939 to begin his contract with David O. Selznick to direct films, Harrison went with him as an assistant and writer. She gained the title of screenwriter when she wrote the film Jamaica Inn (1939) based on the novel by Daphne du Maurier. Harrison continued writing screenplays for films Rebecca (1940), Foreign Correspondent (1940), Suspicion (1941), Saboteur (1942), Dark Waters (1944), and Nocturne (1946).******