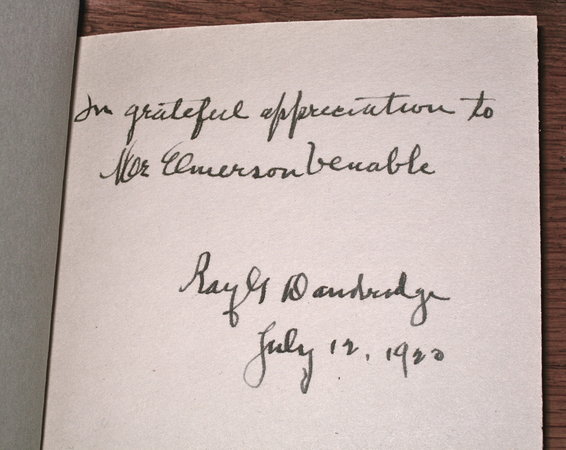 Black Harlem Renaissance Poet Raymond Garfield Dandridge (1883-1930) is beginning to get the attention he richly deserves. His poetry fits between his predecessor Paul Laurence Dunbar (whom he was often compared) and his successor Langston Hughes, beacon of the Harlem Renaissance. Dandridge was writing at the same time as Hughes, Zora Neale Hurston and Claude McKay but he would never see Harlem because he was paralyzed. Dandridge has a strong sense of Black Pride that is vividly expressed within this extremely scarce signed volume. He does not shy away from radical social issues. Through his poetry he promotes equality, condemns racism and injustice, and celebrates African American culture, humor, and spirituality.

THE POET AND OTHER POEMS By Raymond Garfield Dandridge.

Hardcover, illustrated paper covered boards, 7.5" x 5", marbled end-papers, 64 pages. VERY GOOD CONDITION: Complete as issued. The covers have light edge and spine-end wear; light age-toning; a touch of wear to the boards and a small stain. Internally, just some stiff upper corner creasing to the last text leaf, otherwise the inner pages are tight, bright, clean and unmarked, and the 1920 signature/inscription is bold and bright. Books signed by Dandridge are extremely hard to find and historically important. He died when he was only 47 years old.

The Harlem Renaissance was a phase of a larger New Negro Movement that emerged in the early 20th century and helped usher in the civil rights movement of the late 1940s and early 1950s.

In 1911, Dandridge caught polio (or had a stroke) leaving his legs and right arm paralyzed. He spent his entire writing career confined to bed. He worked as a salesman for a coal company via telephone, and was the Literary Editor of the Cincinnati Journal. He published three books of poetry: Penciled Poems (1917), The Poet and Other Poems (1920), and Zalka Peetruza and Other Poems (1928). His work appears in anthologies of African American poetry, including The Book of American Negro Poetry.

A few examples of his powerful poetry collected in this volume:

"My Grievance," addresses racism in general and lynching in particular: "Yes, I am lynched. Is it that I Must without judge or jury die? Though innocent, am I accursed To quench the mob's blood-thirsty thirst?"

"Time to Die," is a call to action: "Black Brother, think you life so sweet That you would live at any price? Does mere existence balance with The weight of your great sacrifice?"

"Color Blind," champions equality and tolerance: "True I am black not by my will; I had no choice of hue, And none was given you. By His decree our roles we fill.

Red man, Yellow man, Brown man, You too, man of white, What cause or right Have we to emphasize our clan?"

"Brother Mine," exposes Jim Crow oppression: "Prejudice with venom smote every word and act; Snuffed was the light of knowledge from your view. Unbefriended martyr, sole object of attack, Has your fair brother fairly dealt with you, Brother mine?"

This collection is also recognized for having the earliest published example of "Jazz Poetry" by a Black Poet "De Drum Majah". His evocative use of dialect, though controversial, reveals African American life while protesting racial inequality.