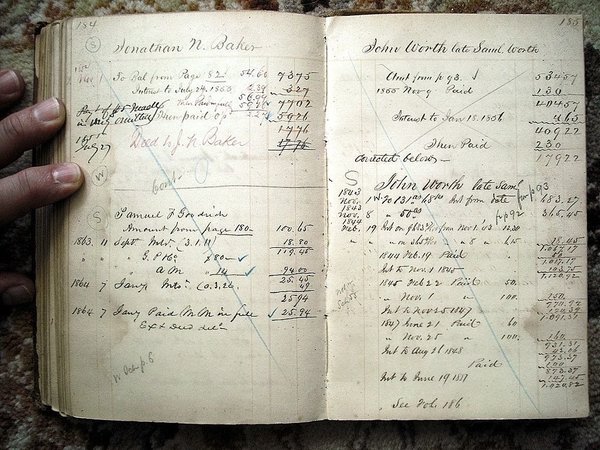 ACCOUNTS LEDGER BOOK of JUDGE JOHN MEREDITH READ of PENNSYLVANIA from 1830 through the SETTLING OF HIS ESTATE - AS RECORDED AND SETTLED by MICHAEL MEYLERT also of PENNSYLVANIA. JOHN M. READ was a FOUNDER OF THE REPUBLICAN PARTY, JUDGE ON PENNSYLVANIA SUPREME COURT, PROMINENT PENNSYLVANIAN. His Grandfather GEORGE READ was a SIGNER of the DECLARATION OF INDEPENDENCE and the CONSTITUTION. MICHAEL MEYLERT was the FOUNDER of LAPORTE, PENNSYLVANIA, and a PROMINENT PENNSYLVANIAN. From the front pastedown: "With the above exceptions, all the Accounts in this RED BOOK... are in the Schedule made out by MEYLERT for JUDGE READ". FILLED with NAMES and TRANSACTIONAL ACCOUNTS of HUNDREDS of Notable PENNSYLVANIANS. Dates run from 1830 to 1883, the year of death of MICHAEL MEYLERT who was settling the estate. Leather Bound Ledger Book, 5.5x7.5, 209 pages. All pages, including endpapers, filled in with manuscript writing and accounting. An important look at the estate of JUDGE JOHN M. READ and his extensive list of Creditors and Associates. READS LIKE A WHO'S WHO IN PENNSYLVANIA at the time. Each account lists the name of the creditor or debtor. Transactions are listed by date. When settled the accounts were lined out in blue. The amounts of MONEY and LAND settled in these accounts is quite significant for the time. Many of the accounts were passed on from one deceased person / estate to another to another, with all being named (e.g. one account title: Chester Bucks late, Martin Blodier late, Irad Goodell late, Ezekiel Barr). Pennsylvania counties involved include: Luzerne, Lycoming, Sullivan, Philadelphia, and others. Named Accounts in this Ledger include William Nesbitt, Daniel and John Brewster, Clark Camp, Henry McCracken, Francis Strathers, Hiram Washburn, Archibald Snell, Joseph Snell, Samuel Kellum, Isaac McPherson, William F. Middaugh, Eli Gibbs, Rosanna Barr, Michael Fee, Philip Steel, Joel Miller, George Hunsinger, Christian Hunsinger, Daniel S. Robinson, Levi Walker, Harry L. Pepper, Michael McIntyre, Ellis Dunlap, Abel Platt, Calvin W. Churchill, Abraham Van Fleet, William Sweet, and many more. The names deserve researching. The few I researched were significant, including "Isaac McPherson, late," who was a correspondent of Thomas Jefferson. The accounts are not arranged alphabetically, however there is a manuscript alphabetical index of all the names on the early pages. LOTS of names, lots of cross-referencing. The accounting contains detailed notes regarding what was paid and what it was paid for, exact dates of payments, what land transacted and the land values, etc. Many of the accounts also have notes, some regarding relatives who were unhappy with settlements and who had to be informed of the exact details by "M" (Michael Meylert). Condition: The covers are worn, scraped and rubbed, worn through at the corners and spine ends, with the leather covering peeling at some places; nonetheless these original leather covers are still doing their job well. The binding is shaky but holding, the inner hinges have fully split at a number of places exposing the inner binding and threads that still hold the pages together. There is a stain with shorelining to the front margin area of the first and last 15 or so pages, dark on the endpapers growing lighter until it disappears, the manuscript writing is always legible beneath. The manuscript writing is clear and written legibly, it is lighter on some pages than others but always readable except on 2 pages that are very soiled, like those two pages were stepped on with muddy boots back in the 1800s. An important and

rare look at the genealogy of notable families of Pennsylvania that had business or other financial ties to Judge John M. Read. You can find a lot about JOHN MEREDITH READ and about MICHAEL MEYLERT by searching various Pennsylvania Historical websites.