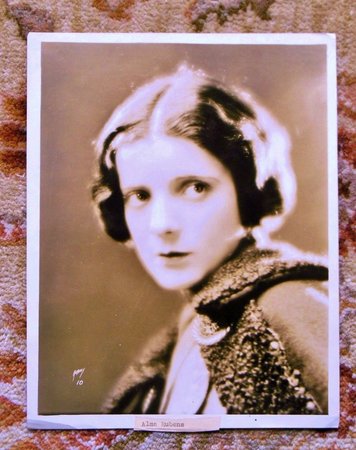 Glossy 8x10" photo of ALMA RUBENS. This is an original publicity / press photo of Alma Rubens, undated but circa 1920. Rubber-stamped on the backside is "ALMA RUBENS / Appearing in / William Fox Photoplays". Written in pencil on the backside, below the rubber-stamped info is: "Keep one or Both for Files". VERY GOOD condition, toning to the edges, some creasing to the corners, a small piece of tape with "Alma Rubens" typed on to it is attached to the bottom white margin.

The photo itself is soft-focus. Printed on the photo in white is "Autrey 10". About ALMA RUBENS (from Wikipedia and IMDB): ******Alma Rubens (1897 - 1931) was an American film actress. Alma Rubens was born Alma Genevieve Reubens in San Francisco, California. She was interested in entertaining at an early age. By the time she was 19 she had become a full-fledged star. Her break came in 1916 in the film Reggie Mixes In (1916). Six more films followed that year, and she won critical acclaim in The Half-Breed (1916). In 1917 she again starred in a box-office smash, The Firefly of Tough Luck (1917). She became a busy young actress with role after role and hit after hit. In 1924, as Mildred Gower, she performed magnificently in The Price She Paid (1924). After a busy 1925, Alma suddenly found it difficult to obtain work, but it was not because her star had suddenly dimmed - it was because of her addiction to heroin. The money she made dwindled away in search of the next high. She was in and out of mental asylums, but it didn't really help much because she was still dabbling in drugs. Weakened by her habit, she died in Los Angeles in 1931, of pneumonia. She was less than a month away from her 34th birthday. Her final two films were two years earlier, Show Boat (1929) and She Goes to War (1929).******