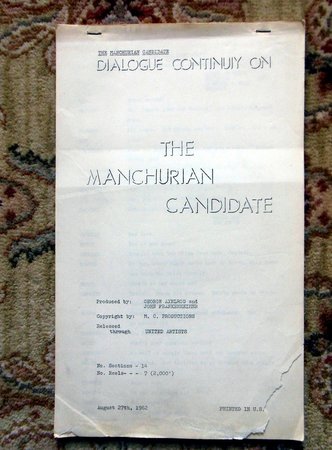 Plain off-white paper covers, dated August 27th, 1962, on the front cover, mimeographed pages,8.5x14 inches, printed on one side only, bound with 2 staples at the top.

Dialogue Continuity is by "Reel" with Seven Reels of side A and B on 56 numbered pages, plus the cover / title page.

The DIALOGUE CONTINUITY is a SHOT BY SHOT / REEL BY REEL breakdown of the SCRIPT.

CONDITION: The cover page has a piece torn from the bottom right corner, chipping with associated creasing to its bottom left corner, and creasing to its entire bottom margin; the cover page also has a couple horizontal creases (please see images). The inner pages have light creases to the bottom corners, toning to the margins, and signs of light handling, otherwise complete, bright, clean and unmarked.

A RARE and WONDERFUL CONTINUITY SCRIPT for one of the FILM MASTERPIECES of the 20th Century.

About THE MANCHURIAN CANDIDATE (from Wikipedia):

The central concept of the film is that the son of a prominent, right-wing political family has been brainwashed as an unwitting assassin for an international Communist conspiracy. The Manchurian Candidate was nationally released on Wednesday, October 24, 1962, at the height of the Cuban Missile Crisis. The film was critically acclaimed, and was nominated for two Academy Awards.

The Manchurian Candidate was selected for preservation in the United States National Film Registry by the Library of Congress as being "culturally, historically, or aesthetically significant".

In April 2007, Angela Lansbury's character was selected by Newsweek as one of the ten greatest villains in cinema history.******