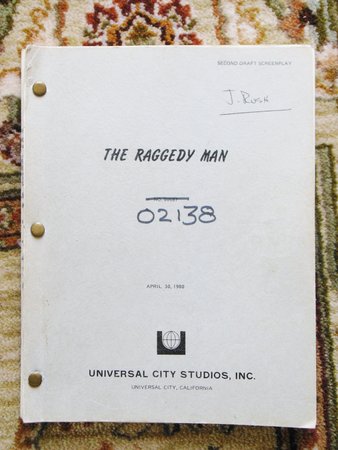 RAGGEDY MAN. SECOND DRAFT SCREENPLAY by William D. Wittliff. The Draft is dated April 30, 1980. Working Copy of Jack Rush, with his signed initials "J. Rush" on the front cover. Jack Rush was a crew member involved in supervising special effects and props, though uncredited on this film. He has highlighted various text in yellow and has made relevant pencil notes and marks here and there throughout. Printed Universal Studio Covers, printed on gray, heavy stock paper, 8.5x11", bound with 3 brass brads, inner pages photocopied on light green paper, (photocopying was, and still is, how original copies of a draft script were quickly produced and distributed to film producers, agents, directors, and others involved in a motion picture production), pages printed on one side only, 103 pages plus a title page. Title written on spine with black marker. VERY GOOD condition, some edge wear, corner tip creases and other light signs of handling. RAGGEDY MAN was Directed by Jack Fisk, based on the novel by William Wittliff and Sara Clark. It stars SISSY SPACEK, ERIC ROBERTS, and SAM SHEPARD. It was released by UNIVERSAL PICTURES on September 18, 1981, almost 1 1/2 years after the date of this Second Draft Screenplay.