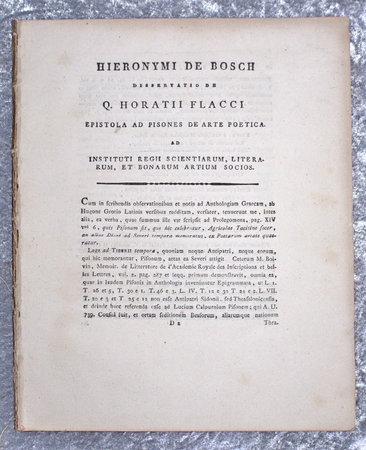 Published by Commentationes Latinae Tertiae Classis Instituti Regii Belgici, [Amstelodami, 1818]. Softcover, disbound from a larger work, page edges red, 10" x 8.15", p. [27]-94. This is Bosch's complete two part treatise on Horace's Ars Poetica (The Art of Poetry). CONDITION: Lacking the front cover; a touch of age-toning; otherwise very good, bright, clean and unmarked. Scarce, OCLC locates only 6 copies held in collections worldwide. Published circa 18 BCE, Horace's "Epistula Ad Pisones" (Epistle to the Pisos) was given its enduring title "Ars Poetica" by literary critics after his death. Written in verse, in the form of a letter to the oldest of the two sons of Lucius Calpurnius Piso, advising him on writing poetry, with a particular emphasis on drama. From the Middle Ages to the Renaissance and up to the present, the "Ars Poetica" remains one of the most influential works of its kind. Horace (Quintus Horatius Flaccus, 65-8 BCE) Roman Lyric Poet and Critic during the time of Augustus Caesar. Hieronymus (or Jeronimo) de Bosch (1740-1811) Noted Dutch Scholar, Author and Latin Poet.