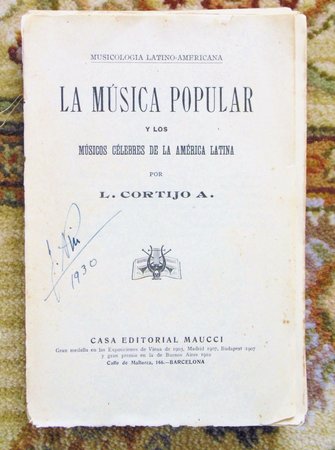 5.5x8.5", 446 pages. Illustrated with drawings and musical snippets. CONDITION: LACKING FRONT COVER AND PRELIMS (first page is the title page); spine covering mostly chipped off, rear cover present but very worn; the first few signatures are disbound and loose, and the rest of the binding is very shaky with some signatures loose and many almost loose; some dark dime size stains here and there throughout (mostly in the blank front or bottom margin); some margin marks; the first few pages have edge wear; nonetheless a textually complete copy of this important book, SIGNED (Initialed) by one of the great Composers and Arrangers of Spanish Music, Joaquin Nin. About JOAQUIN NIN (from Wikipedia): ******Joaquín Nin y Castellanos (September 29, 1879, Havana - October 24, 1949, Havana) was a Cuban pianist and composer. Nin studied piano with Moritz Moszkowski and composition at the Schola Cantorum (where he taught from 1906 to 1908). He toured as a pianist and was known as a COMPOSER and ARRANGER of POPULAR SPANISH FOLK MUSIC. Nin was a member of the Spanish Academy and the French Legion of Honor. He was the father of Thorvald Nin, composer Joaquín Nin-Culmell, and writer Anaïs Nin with singer Rosa Culmell. In her diaries and fiction, his psychoanalytically oriented writer daughter Anaïs Nin often attempts to explain her own personality and problems by recalling how her father treated her as a child. She was also close to him off and on as an adult. Her "unexpurgated" diary volume Incest: From a Journal of Love describes an adult incestuous relationship with him. He also appears in her fiction. She describes him as an egotistical Don Juan, and she imitated him at times by being a "Doña Juana".******