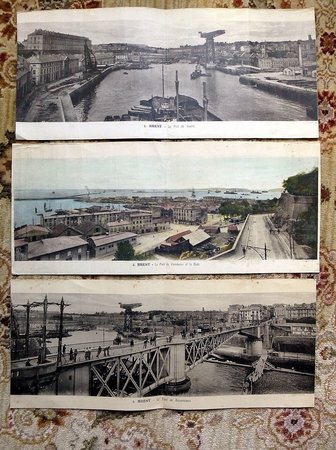 THREE ORIGINAL PANORAMIC PHOTOGRAVURE ENGRAVINGS of BREST (France) by ARTAUD ET NOZAIS, Nantes, undated but circa 1915. Fold-open panoramic plates - photo engravings, numbered 1 - 3, originally of a set of such engravings. Each photogravure is 22x9.5" (56 cm x 24 cm). Each has printed information at the bottom right corner: "ARTAUD ET NOZAIS, IMP.-EDIT., NANTES." One of the plates is hand-tinted. 1. BREST - LE PONT DE RECOUVRANCE (Though this bridge was Officially the "Pont National" prior to its being destroyed, rebuilt, and renamed "Le Pont de Recouvrance" after World War II, this is an early image of the Original Bridge circa 1915. The bridge, even in 1915, was often referred to as the Pont de Recouvrance because it connects to the Recouvrance District of Brest.) 2. BREST - LE PORT DE COMMERCE ET LA RADE. (This Photogravure is beautifully HAND-TINTED.) 3. BREST - LE PORT DE GUERRE. Only FAIR CONDITION. The photogravures each have a stiff vertical fold down the middle as issued; there are also numerous vertical creases, probably from being rolled-up numerous times; there is edge and corner wear; there is light foxing; and there are general signs of handling. Nonetheless, these panoramic plates remain clear and the images are wonderful. The postcard images by Artaud et Nozais are easily found, but these ORIGINAL PANORAMIC PHOTOGRAVURE PLATES circa 1915 are VERY SCARCE.