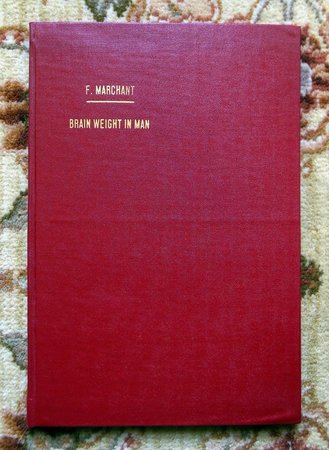 3 Mark" at the bottom), title page, 88 pages (numbered 393-481 - this is one of a series of scientific publications, numbered consecutively), back wrapper (with Publisher's ads on both sides). Contains numerous tables. GOOD condition, the recent hardcovers and endpapers are very nice, the bound-in original publication has foxing, primarily to its wrappers and first and last few pages, otherwise complete, tight, bright, clean and unmarked. About FELIX MARCHAND (from Wikipedia): ****** Felix Jacob Marchand (22 October 1846 - 4 February 1928) was a German Pathologist born in Halle an der Saale. He studied medicine in Berlin, and later became an assistant at the Pathological Institute in Halle. In 1881 he became a Professor of Pathological Anatomy in Giessen, and two years later garnered the same position at Marburg. In 1900 he succeeded Pathologist Felix Victor Birch-Hirschfeld (1842-1899) at the University of Leipzig. In 1904 Marchand was credited with coining the term Atherosclerosis from the Greek "athero", meaning gruel, and "sclerosis", meaning hardening, to describe the fatty substance inside a hardened artery. His name is lent to the eponymous "Marchand's Adrenals", which is theaccessory adrenal tissue in the broad ligament of the uterus. Among his written works is a 1915 textbook on pathology that he co-authored with Ludolf von Krehl (1861-1937), called "Handbuch der allgemeinen Pathologie".******