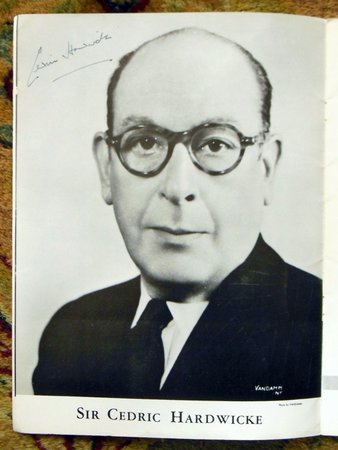 A MAJORITY OF ONE - SOUVENIR PROGRAM of the Award Winning Theatrical Play about Prejudice against the Japanese. Published circa 1959. SIGNED by THIRTEEN of the PERFORMERS, most notably: SIR CEDRIC HARDWICKE, GERTRUDE BERG, BERTA GERSTEN, and SAHOMI TACHIBANA. Other signers are Maurice Ottinger, Joyce Flynn, Arsenio Trinidad, Kanna Ishii, John Malcolm, Claire Lu Thomas, Yasuko Adachi, Yvette Cardinoza and Yoji Matsuda. An Original Vintage Autographed Stage Play Souvenir Program, illustrated paper covers, side stapled, 9x12" [23 x 30 cm], 16 pages. GOOD condition: the spine fold is scraped and splitting for 1.5 inches at the bottom but holding well, the covers have some finger smudges, the rear cover has a scrape to its upper edge and spine margin, otherwise the covers are solid and bright; internally, the "Berta Gersten" page has been pasted over the page of a previous actress who she obviously replaced, overall the inner pages are just lightly used, still bright and clean. SCARCE with the SIGNATURES of CEDRIC HARDWICKE, GERTRUDE BERG and ELEVEN OTHERS. About A MAJORITY OF ONE (from Wikipedia): ******The play is a drama concerning racial prejudice involving Mrs. Jacoby, a Jewish widow from Brooklyn, New York, and Koichi Asano, a millionaire widower from Tokyo. Mrs. Jacoby is sailing to Japan with her daughter and foreign service officer son-in-law who is being posted to the U.S. Embassy in Tokyo. She still considers the country the enemy responsible for the death of her son during World War II, but her feelings change when she meets Mr. Asano on board the ship. When she advises her family of Mr. Asano's desire to court her, Mrs. Jacoby's daughter, whose loyalty is to her mother rather than her husband, objects to the possibility of an interracial marriage. The 1959-60 Broadway production was directed by Dore Schary and ran for 3 previews and 556 performances, with Gertrude Berg and Cedric Hardwicke. In 1961 Spigelgass adapted his play for a Warner Bros. film starring Rosalind Russell, Alec Guinness, Madlyn Rhue and Ray Danton and directed by Mervyn LeRoy.******