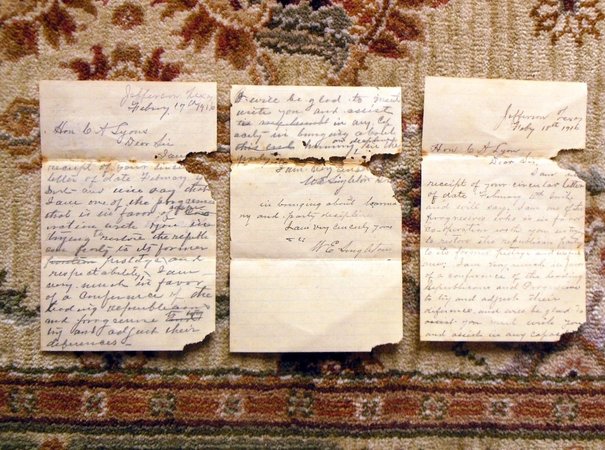 Three Page Handwritten Draft Letter by a Politically Progressive Texas Man re: Reforming the Texas Republican Party: "I am one of the progressives who is in favor of co-operation with you in trying to restore the Republican Party to its former prestige and usefulness..." The draft letter is written by W. E. Singleton (Captain WILLIAM E. SINGLETON) of Jefferson, Texas, and addressed to "Hon. C. A. Lyon" (Honorable CECIL ANDREW LYON). The draft letter is dated "Jefferson Texas / Feb (17th and 18th), 1916". It is interesting to note that Cecil A. Lyon died two months after this draft was written, and William E. Singleton died within a year after this draft was written. Both deaths marking the end of "Progressive Republicans" in Texas. This draft letter is handwritten, it is the same text written out twice, once in pencil and once in ink, as if in practice for a finished letter that would (presumably) be sent. Three pages written on one side only of three sheets of watermarked laid-paper 5x8". The text is as follows: "I am in receipt of your circular letter of date February 4th (?) and will say: I am one of the progressives who is in favor of co-operation with you in trying to restore the Republican Party to its former prestige and usefulness. I am very much in favor of a conference of the leading Republicans and Progressives to try and adjust their differences and will be glad to meet with you and assist in any capacity in bringing about harmony and party discipline. I am very sincerely yours, W.E. Singleton". POOR condition, thumbprint size chip on the right side of the sheets, lesser chipping at the bottom right corner, all sheets have two horizontal folds from where they were folded to fit into an envelope, one sheet has insect holes all along its upper fold, almost splitting the sheet into two parts, another sheet has some insect holes across its top fold, the chip and holes affect some text, all sheets have some toning and foxing; NONETHELESS, the writing is clear and the text legible. An interesting historic letter regarding PROGRESSIVE REPUBLICANS in TEXAS in the early 20th century. About the PROGRESSIVE REPUBLICAN ERA (from Wikipedia): ******During the 1910s and 1920s, progressives formed a faction in the Republican Party. They typically held center-left views on most issues, supporting broad government involvement in business, particularly breaking 'trusts' and limiting the size of corporations, reforms in government, income taxes, universal health care, and other forms of 'social justice'. This faction gradually shrank, with many joining the Democratic Party as it shifted to the left. Prominent progressive Republicans included Theodore Roosevelt, Hiram Johnson, and Robert La Follette.****** About CECIL ANDREW LYON (from the Texas State Historical Association website): ******On the heels of the Republican convention, when Roosevelt bolted the party to run as the candidate of the National Progressive Republican League, Lyon led the state Progressive convention, which met at Dallas. He served as this party's state chairman and as a national committeeman from 1912 until his death. After Democrat Woodrow Wilson's victory Lyon worked to unify the Republican party in the state. He called for a meeting of reunification that convened in Dallas in March 1915 and served as the first step in healing political wounds. Lyon, however, played only a small role in that reunification, for he died on April 4, 1916. At the time of his death, in addition to his political activities, he was president of the Lyon-Gray Lumber Company, vice president and general manager of the Hardeman County Irrigation Company in Sherman, and a member of the board of directors of the Great Southern Life Insurance Company of Houston.****** The Jefferson Texas Home of CAPTAIN WILLIAM E. SINGLETON is a Historic Landmark.