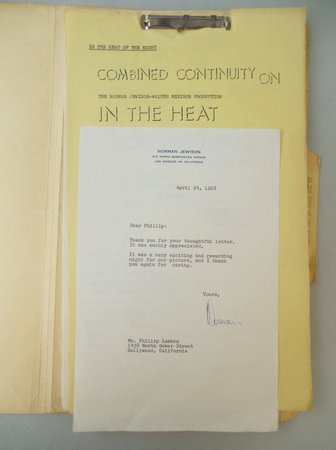 ORIGINAL COMBINED CONTINUITY SCRIPT / SCREENPLAY of IN THE HEAT OF THE NIGHT, the 1967 FILM Directed by NORMAN JEWISON and Starring ROD STEIGER and SIDNEY POITIER.

The film was produced by The Mirisch Corporation and Released by United Artists on August 2, 1967.

Continuities (Continuity Scripts) were an important part of the film industry in its earlier days. They were typically created after a film was "in the can", but before it was released, in order to create a written "copy" of the film. A good "Continuity", especially a "Combined Continuity", provided a comprehensive written transcription of the finished film, something that could obviously not be known until a film was completed. Continuities were created both for copyright protection and for a "record" of a film. Many early films easily degenerated, and many others were wiped out to recover their silver. A true continuity script was therefore often the only archived, word-by-word, shot-by-shot, scene-by-scene, record of many films.

Mimeographed sheets, yellow front cover, 8.5x14 inches, mimeographed on one side only, 98 pages plus the cover page. Two hole punched at the top and bound by a metal bracket. The entire continuity / screenplay is laid-in a legal size manila folder. This was done quite some time ago because the metal bracket has rusted somewhat and has left its rust imprint on both the front and rear covers of the manila folder. The manila folder has a typed title on its tab: "IN THE HEAT OF THE NIGHT". This script was clearly filed away, perhaps in a legal department, perhaps in the Studio's files.

LAID-IN the manila folder, on top of the Continuity / Screenplay, is a TYPED SIGNED LETTER by NORMAN JEWISON. The letter is on NORMAN JEWISON'S PERSONAL STATIONERY.

The letter is addressed to PHILLIP LAMBRO, a Composer of Film Scores.

The letter is dated APRIL 24, 1968, only 14 days after the April 10, 1968, 40th ACADEMY AWARDS that presented Oscars to films released in 1967. IN THE HEAT OF THE NIGHT won MULTIPLE OSCARS at the 40th Academy Awards, including BEST PICTURE (and, perhaps of interest to Phillip Lambro, BEST SOUND). Norman Jewison's letter to Phillip Lambro clearly refers to the film's success at the Academy Awards. The letter reads:

"Dear Phillip: / Thank you for your thoughtful letter. It was muchly appreciated. / It was a very exciting and rewarding night for our picture, and I thank you again for caring. / Yours, / Norman (signed)".

Phillip Lambro, b.1935 d.2015, was a composer, best known for his FILM SCORES and percussion oriented music. (Read more about him on IMDB.)

Condition: The cover / title page is mostly torn away from the metal bracket at the top, and is worn along its edges with small closed tears; the last few pages are worn along their bottom edge; otherwise a bright, clean copy that clearly has been safely filed away. The laid-in TLS letter has folds from where it was probably folded to fit into an envelope (envelope is not present), and has some general creases from handling, but remains sturdy, bright and clear.

One of the 20th Centuries Great Films, with an Associated Letter from the Film's Director. Scarce.