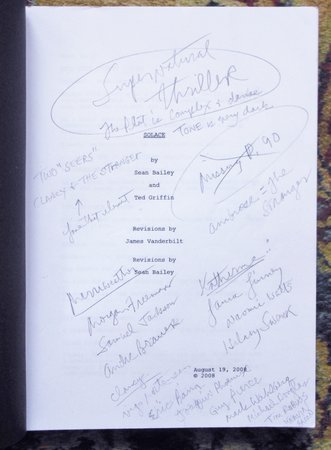 SOLACE. A Screenplay by Sean Bailey and Ted Griffin. Dated August 19, 2008. This is an Early Working Draft Screenplay. Solace was released in France in 2015 and in the United States in 2016, long after this 2008 draft was written. In the years since this draft, the film went

through numerous changes, including major changes to the script, the replacement of the planned Director, the replacement of various Cast members, etc. The Film was originally envisioned as a SEQUEL to the film SEVEN, but that eventually was changed too. Perhaps this early script was the screenplay for the planned sequel, I don't know. This DRAFT SCREENPLAY was presumably owned by someone intimately involved in the film, though I have no idea who he/she might be. The title page is filled with handwritten notes in pencil, including the names of potential actors who might play various characters (e.g. Laura Finney, Naomi Watts, Hilary Swank, Samuel Jackson, etc.). 45 pages have at least a bit of yellow highlighting, and most of the highlights are accompanied with brief relevant handwritten notes. All the sections that have highlighting have been highlighted by hand on this copy (i.e. the highlighting is unique to this copy - as are all the notes in pencil). Black paper covers. Inner pages are photocopied on plain 8.5x11" paper, printed on one side only. (Photocopies were, and still are, common for draft scripts.) The pages are 3 hole punched and bound with 2 brass brads. 119 pages plus the title page and a final page that states "This Script Was Prepared by Warner Bros. Pictures Script Processing Department".

VERY GOOD condition, the pages are lightly toned, overall solid, bright, clean and clear. SCARCE, this is the only copy I have or have seen. About the Film SOLACE (from Wikipedia): ******Solace is an American mystery thriller film directed by Afonso Poyart. It was written by Peter Morgan and Sean Bailey from a story by Ted Griffin. The film stars Anthony Hopkins, Colin Farrell, Jeffrey Dean Morgan, Abbie Cornish, Matt Gerald, Jose Pablo Cantillo, Kenny Johnson and Sharon Lawrence. A psychic doctor, John Clancy (Anthony Hopkins), works with an FBI special agent (Jeffrey Dean Morgan) in search of a serial killer (Colin Farrell). Solace was initially intended to be a sequel to the film Seven. However, that idea was later scrapped and Solace was then developed as a stand alone feature. On May 10, 2012, it was announced that Brazilian director Afonso Poyart was attached to direct. Filming began in the last week of May 2013 in Atlanta, Georgia. The film was released in France in 2015, and in the United States on December 16, 2016.******