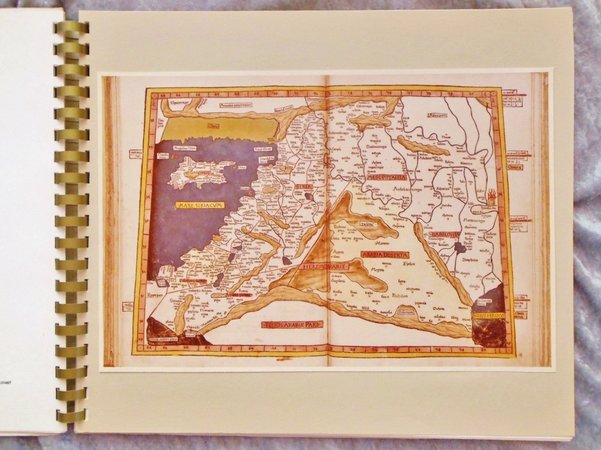 1928 TOBIN MAPS 1978 50TH ANNIVERSARY, compiled and edited by R.L.B. TOBIN (Robert Lynn Batts Tobin). SIGNED and INSCRIBED by R.L.B. TOBIN on a blank prelim page in the year of publication: "For Gibbo / Who was there so much / of the time! / Ever / R.L.B.T. / 1978". Published and Printed by TOBIN SURVEYS, San Antonio Texas, 1978. LIMITED EDITION of ONLY 500 COPIES. From the Colophon Page (the last page): "The Twentieth of December, Nineteen Hundred and Seventy-Eight. / Of this edition there have been but five hundred copies prepared." A gathering of rare maps from the TOBIN MAP COLLECTION, including some of the first printed maps, maps of high historic importance, and maps created by TOBIN SURVEYS itself showing Texas and the Gulf States. (Tobin Surveys was unique in the cartography industry based on its extensive map coverage of States bordering the Gulf Coast, especially Texas.) From the Introduction: "MAPS: A FAMILY SCRAPBOOK. The choice has been arbitrary, the collection seemingly promiscuous, but the affection is genuine in the bringing together of how we have looked at our small part of the universe." R. L. B. Tobin. Soft brown card covers, front cover titled in gilt and blind embossed with a Western Hemisphere map, plastic spiral binding with gold colored spirals, 11x13" oblong. Contains 22 MAPS each on its own leaf, including 6 that fold-open, 3 that are tipped on, 1 that consists of rotating parts, and 1 that has a printed glassine overlay. Most of the maps have a cover leaf that is primarily blank and protective but does contain a brief description of the map. Condition: The front cover is sunned and has a silver dollar size stain to its spine margin that shows through to the backside of the front cover but no further, it does NOT show at all on any of the inner pages; the rear cover is creased at its bottom front corner and has some edge wear including a 1/2" closed edge tear; nonetheless the covers are solid and doing their job well. Internally the pages are Near Fine - tight, bright, clean and unmarked. All the maps are lovely and brilliant, each is suitable for framing. This LIMITED EDITION ANNIVERSARY EDITION of TOBIN MAPS is SCARCE, especially so SIGNED and INSCRIBED by the late President of Tobin Surveys, the Wonderful Philanthropist, R.L.B. Tobin. About R.L.B. TOBIN (from the L.A. Times obituary, April 29, 2000): ******Robert Lynn Batts Tobin, 66, nationally known art collector and patron of the arts. Born in San Antonio, he was the son of Earl Gardiner Tobin, a World War I pilot who went on to found an aerial mapping company. The firm, which became known worldwide for its pioneering mapping techniques using aerial photography, was the only one of its kind through much of the 1930s and '40s. When Earl Tobin died in a plane crash in the early 1950s, Robert, then 19 and a sophomore at the University of Texas, took over the firm. He led it to unprecedented growth before selling it in 1998. At the age of 20, Tobin held the post of president of the Children's Service Bureau in San Antonio and was a staunch supporter of serving the needs of the city's poor. He was an inveterate collector with tastes that included opera, stage design, theater, art, architecture and books. His vast collection of theater designs, which he contributed last year to the McNay Art Museum in San Antonio, included two and three-dimensional costume and set designs and the original Broadway production designs from "My Fair Lady," "South Pacific" and "West Side Story." Tobin's interest in opera led him to become a benefactor of the Metropolitan and Santa Fe operas. In 1995, he donated $1 million to the capital fund to renovate the Santa Fe Opera's amphitheater and grounds.******