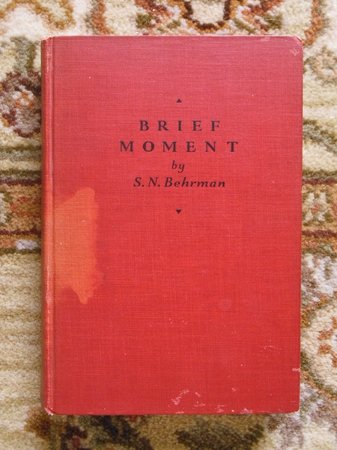 1931 BRIEF MOMENT : A COMEDY IN THREE ACTS - SIGNED by the Author S.N. BEHRMAN + the Play's DIRECTOR, + ALL NINE CAST MEMBERS of the OPENING NIGHT PERFORMANCE which included ALEXANDER WOOLLCOTT

BRIEF MOMENT: A COMEDY IN THREE ACTS, by S.N. BEHRMAN (SAMUEL NATHANIEL BEHRMAN). SIGNED & INSCRIBED by S.N. BEHRMAN, plus SIGNED by the DIRECTOR, plus SIGNED by the ENTIRE NINE MEMBER CAST, plus an OPENING NIGHT TELEGRAM from BEHRMAN to the STAGE MANAGER is tipped in. Behrman's Signature and Inscription is on the title page, below his printed name. It is an interesting inscription in that he ADDS the name of EDDIE MORSE beside his own, basically naming Eddie Morse as a co-author of the play! Behrman's handwritten inscription begins just after the printed "by S. N. Behrman", and it reads: "and / Eddie Morse. / S.N. Behrman / N.Y. Jan 19, '32". The NINE CAST MEMBERS and the DIRECTOR'S SIGNATURES are all on the "Characters" page. The Director was GUTHRIE McCLINTIC.

The Nine Cast Members were: Robert Douglas, Alexander Woollcott, Frances Rich, Paul Harvey, Francine Larrimore, Boris Marshalov, Louis Calhern, Edwin Morse, and Helen Walpole. (Note: This was one of the few plays in which ALEXANDER WOOLLCOTT, the famous writer and wit, acted. Paul Harvey was the actor who died in 1955. Helen Walpole was an actress active in the 1930s who went on to be a noted writer for radio and eventually a prominent figure in the Daughters of the Confederacy.) Tipped in on a blank prelim page is a TELEGRAM to EDWARD MORSE at the BELASCO THEATRE. The Telegram is dated NOVEMBER 9, 1931, the date of the OPENING NIGHT PERFORMANCE. The telegram reads: "DEAR EDDIE YOUVE BEEN A SWEETHEART IN A NICE WAY OF COURSE LOVE AND KISSES SAM." Presumably this was a telegram sent by S.N. Behrman (Samuel Behrman) to Edward Morse, the Stage Manager for the theatrical production (as well as one of the actors), who was also, according to the inscription by Behrman on the title page, a co-author of the play. Someone hand wrote McCLINTIC at the bottom of the telegram, perhaps meaning that the telegram should be shown to Guthrie McClintic, the play's Director. The play was the basis for the 1933 film of the same name, starring Carole Lombard. Hardcover Book, no dustjacket, 5x7.5", 235 pages. Published by Farrar & Rinehart, New York, 1931. First Edition, with the date 1931 and the Publisher's Colophon on the copyright page with no additional printings noted. GOOD condition, the front and rear covers have staining / discoloration near the spine and a bit on the spine, some scrapes here and there, lightly bumped corners, and some wear to the spine ends, but are sturdy and still doing there job well; internally very nice, pages lightly toned with age offsetting to the first few pages, including the title page, from something that had been laid in but is no longer present (newspaper article?), otherwise the pages are tight, bright and clean; and all the signatures and inscriptions are bright and clear. The tipped in telegram is has a chip at its top edge and is worn and creased from handling, but remains solid and clear. Wonderful with the ELEVEN SIGNATURES and TELEGRAM, and BEHRMAN'S Generous Inscription giving authorship credit to Eddie Morse.