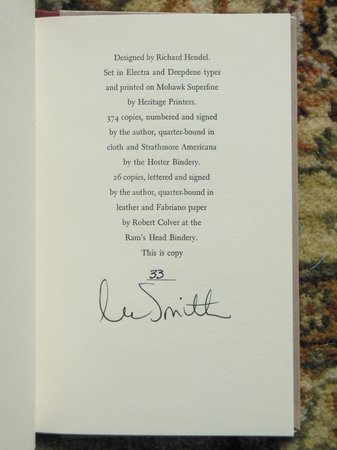 BOB, A DOG, by LEE SMITH. SIGNED, LIMITED , FIRST EDITION. SIGNED and HAND NUMBERED on the Colophon Page (the last page). This is copy number 33 of only 374 copies (a deluxe edition of 26 copies lettered and signed also was issued concurrently). Published by The Mud Puppy Press, Chapel Hill, North Carolina, 1988. Hardcover Book, cloth covered spine and paper covered boards, front cover and spine lettered in silver, no dustjacket as issued, 4.5x7 inches, 37 pages plus the Colophon / Signature / Limitation page. Condition: NEAR FINE, tight, bright, clean and unmarked. A lovely copy. A Rare and Unusual wonderful little book by Lee Smith. About Lee Smith (from Wikipedia): ****** Lee Smith (born November 1, 1944) is an American fiction author who typically incorporates much of her background from the Southeastern United States in her works. She has received writing awards, such as the O. Henry Award, the American Academy of Arts and Letters Award for Fiction, the North Carolina Award for Literature, and, in April 2013, was the first recipient of Mercer University's Sidney Lanier Prize for Southern Literature. Her novel The Last Girls was listed on the New York Times bestseller's list and won the Southern Book Critics Circle Award. Mrs Darcy and the Blue-Eyed Stranger, a collection of new and selected stories was published in 2010.******