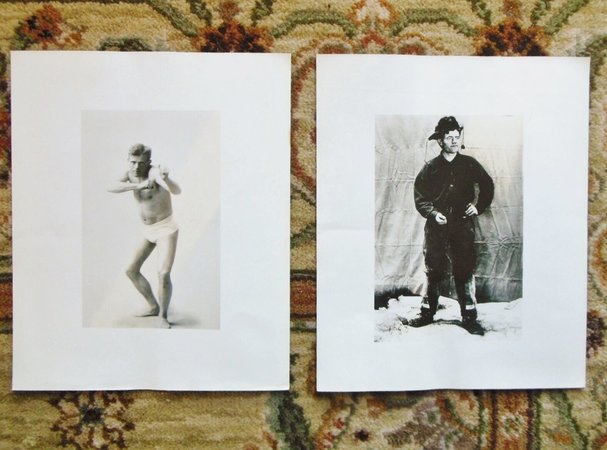 TWO PHOTOGRAPHS OF JACK LONDON, used as aids for developing the character of Jack London in the film THE ADVENTURES OF MARTIN EDEN. Each photo has the following typed statement attached to its backside: : "AN EARLY PHOTOGRAPH OF JACK LONDON which served as an aid to Glenn Ford in his title characterization in Columbia's 'The Adventures of Martin Eden.' The photographs were borrowed from the London estate prior to production of the picture." There is also an identification number typed on each slip, and an identification number handwritten in pencil on the top of the backside of each photograph. The photographs are 8x10 glossy b&w prints. They are original prints from the Jack London Estate, but may be prints of a photo of a photo, or prints from old negatives. Though I am not certain what generation the photographs are, they clearly are early, certainly pre 1942 which was when the film The Adventures of Martin Eden was released. These photographs were obviously taken during Jack London's short life (b 1876 d. 1916) with the originals becoming part of Jack London's Estate upon his death in 1916. The photographs are in Good condition with some light creases and bends from handling and use. About MARTIN EDEN the novel, and THE ADVENTURES OF MARTIN EDEN the film: ******Originally published in 1909, Jack London's novel MARTIN EDEN tells the story of a self-taught member of the Proletariat struggling to become a writer. The novel provided the basis for the 1942 movie THE ADVENTURES OF MARTIN EDEN starring Glenn Ford and Claire Trevor and distributed by Columbia Pictures.******