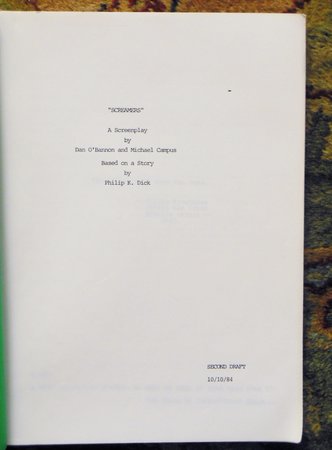 1984 EARLY DRAFT SCREENPLAY of SCREAMERS by DAN O'BANNON based on a PHILIP K. DICK Story

SCREAMERS. A SCREENPLAY by DAN O'BANNON and MICHAEL CAMPUS, Based on a Story by PHILIP K. DICK (story titled: Second Variety).

The Film SCREAMERS was released by Columbia Pictures in 1995, more than 10 years after this second draft. In the later years of the screenplay's development, Miguel Tejada-Flores was brought in to rewrite the screenplay. Both Dan O'Bannon and Miguel Tejeda-Flores are credited as screenwriters on the final film. Michael Campus, co-writer of this early draft, is not credited on the final film.

(IMDB states, in its TRIVIA section on the film SCREAMERS, that: "Dan O'Bannon had been working on the screenplay for Screamers (1995) as early as 1981. An October 10, 1984 draft credits Michael Campus as co-writer. It is unknown whether Campus also intended to direct.")

This 1984 screenplay was clearly intended to be the second film adaptation of a Philip K. Dick story, the first being Blade Runner (based on Do Androids Dream of Electric Sheep?) But for some reason the film did not go into production until many years later.

Plain green paper covers, 3 hole punched and bound with 3 brass brads, pages are photocopied on 8.5" x 11" paper (photocopying was, and still is, how original copies of a draft script were quickly produced and distributed to film producers, agents, directors, and others involved in a motion picture production), pages printed on one side only, 111 pages plus a title page followed by a page with a quote: "The living will envy the dead. - Nikita Khrushchev during the Cuban missile crisis 1962", and with a comment about the opening sound for the film: "SOUND: A deep thundering rumble... so deep we feel it more than hear it... the sound of interstellar space...".

VERY GOOD condition, the title SCREAMERS is written on the rear page edges,

the photocopied pages have some dust marks and small spots, typical of early copy machines, otherwise just some light signs of handling. A great original copy of this early draft screenplay.