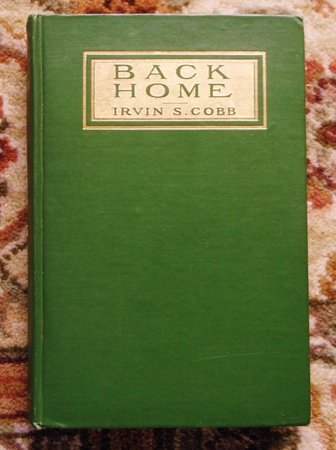 BACK HOME, by IRVIN S. COBB. A novel based in Kentucky, a collection of short stories about a fictional Kentucky judge, Judge Priest. SIGNED, INSCRIBED and DATED by IRVIN COBB on the front free endpaper to His Friend and Colleague S(amuel G.) Blythe: "Jan 14, 1913 / To Old S. Blythe / from Young I. Cobb". Samuel G. Blythe, 1868-1947, was a friend of Irvin S. Cobb, and it was Blythe who brought Cobb to the New York World newspaper where Cobb eventually became the highest paid staff reporter in the United States. At the time that Cobb was hired, Blythe was head of the paper's Washington Bureau. Both Irvin S. Cobb and Samuel G. Blythe are renowned early American humorists, columnists and reporters. One of Blythe's books, The Fun of Getting Thin, is still in print, and very funny. The humor in Cobb's inscription in this book is in the fact that Blythe is not much older than "young" Cobb, 1876-1944. Hardcover Book, green cloth covered boards, gilt title background on the front cover, gilt titling on the spine, 5x8 inches, 348 pages. Illustrated with 10 b&w plates. VERY GOOD condition, the cover's corner tips are slightly bumped, there is some wear to the spine ends, the spine gilt is somewhat faded, the inner pages are lightly toned at the margins, overall the book is very nice - tight, bright, clean and unmarked (except for the author's inscription, of course). An attractive and very presentable copy. The intimate inside joke inscription by Cobb to his friend Blythe makes this book special.