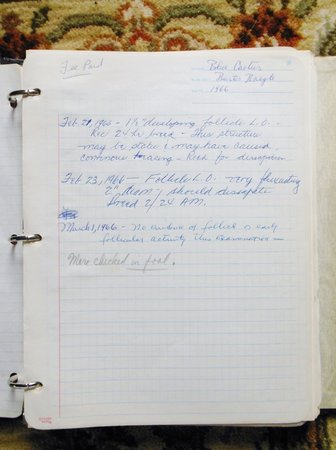 Three Ring Binder filled with Handwritten Notes and Official Record Sheets on Mares Bred (Pacific Coast Quarter Horses) during 1965 and 1966. Horse names include: BLUE CACTUS, Jesse Bar, BLUE LEDGER, Blue Miller, BOLD MINUTE, (Copay?) Coleen, CAT SOX, and many many MORE. For each horse, or perhaps for each time a mare is bred, there is a page with some handwritten notes followed by what appears to be an official page filled with small boxes with handwritten code letters in many of the boxes (I assume breeders know what the code letters stand for). Approximately 150 - 200 total sheets, meaning 75-100 pages of notes with 75-100 official sheets with handwritten letter codes. There is no definitive information on the binder's owner, perhaps RUSSELL SMITH because there is a personal letter (apparently unrelated to horse breeding) laid-in the front on his letterhead which reads: "Russell Smith / R-S / Registered Quarter Horses / Paicines, California." Russell Smith was actively involved in the PCQHA, so it would make sense that the binder was his. However, the letter is dated 1955 and the horse information is from 1965-1966, so... GOOD condition, some of the pages have pulled away from the 3 rings and are torn at the holes, but they remain in their proper order; otherwise the pages are bright, clean, clear and fully legible. An interesting look at Quarter Horse Breeding in Northern California.