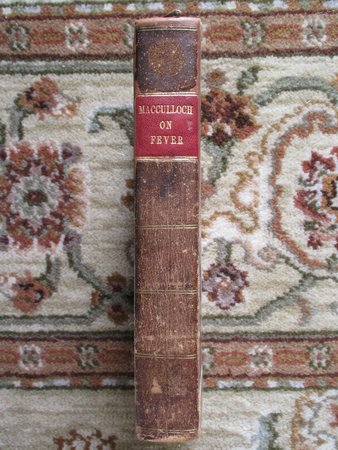 An ESSAY on REMITTENT and INTERMITTENT DISEASES: Including, Generically MARSH FEVER and NEURALGIA : Comprising Under The Former, Various Anomalies, Obscurities, and Consequences, and, under a New Systematic View of the Latter, Treating of TIC DOULOUREUX, SCIATICA, HEADACHE, OPHTHALMIA, TOOTHACHE, PALSY and Many Other Modes and Consequences of this Generic Disease. By JOHN MACCULLOCH, M.D., FRS. PHILADELPHIA: Carey & Lea, 1830. Hardcovers, leather covered boards, red leather spine title label, spine lined in gilt, 5x8.5 inches, 474 pages. (Pages numbered i-xiv, 17-474. The first page of text was incorrectly numbered by the printer 17 instead of 15. This volume, with the above pagination, is complete and has been collated with original copies at Ghent University and elsewhere.) GOOD Condition: The covers have some peeling of the leather, scrapes, and are worn at the edges and corners; There are several ink ownership signatures on the front free endpaper, a blank prelim, and the title page, the most recent being Albert G. Welch, 1834. The blank front free endpaper has its upper corner area torn off, has a dime size ink splotch (mirrored on the front pastedown), and some offsetting and soiling. The rear blank free endpaper has a quarter size hole, a dime size hole, and offsetting. Both the front and rear endpapers are foxed. There is some light foxing throughout, mainly confined to the margins. Otherwise the inner pages remain tight, bright, clean and unmarked. Overall a solid, nice copy. An important and somewhat forgotten work on Malaria by a Renowned Scottish Geologist. About JOHN MACCULLOCH (excerpted from various online medical journals including the Cambridge Journal of Medical History, 1977): ******JOHN MACCULLOCH, M.D., F.R.S. (1773-1835), THE PRECURSOR OF THE DISCIPLINE OF MALARIOLOGY. The first time the term 'malaria' was used in an English scientific publication was in 1827 in a book by John Macculloch. Though renowned as one of the prominent, early British geologists, his works on "Marsh Fever" make him one of the first English physicians to develop the field of Malariology. His works on Malaria, though rather forgotten, were at the time both important and groundbreaking. (footnoted: In the eleventh edition of the Encyclopedia Britannica, the following entry will be found: "Malaria, an Italian colloquial word introduced into English medical literature by Macculloch in 1827, as a substitute for the more restricted terms marsh miasm or paludal poison." See also H. Scott, "A History of Tropical Medicine"; and PF. Russell "Man's Mastery of Malaria".) There is a long Wikipedia page about John Macculloch's many important geological works, but Wikipedia does not mention a word about his medical studies.******