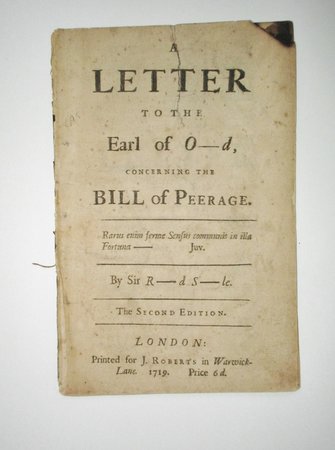 A LETTER to the EARL of O--d, Concerning the BILL OF PEERAGE. By Sir R----d S----le (Sir Richard Steele). LONDON: Printed for J. Roberts in Warwick-Lane, 1719. The Second Edition, so stated. Paper item, 4.5x7 inches, 32 pages. Condition: Completely disbound, all signatures and a few leaves are loose but all are in their proper order; the first page has a 2 inch closed tear starting at the middle of the top edge, the first few pages have a blackened and chipped upper corner (not affecting text), the pages are lightly toned, the first and last page are lightly soiled. Despite its flaws this is a complete copy, with printing that is clear, bright and fully legible. About SIR RICHARD STEELE (from Wikipedia and elsewhere on the Internet): ******Sir Richard Steele (bap. 12 March 1672 - 1 September 1729) was an Irish writer and politician, remembered as co-founder, with his friend Joseph Addison, of the magazine The Spectator. Steele became a Whig Member of Parliament in 1713, for Stockbridge. He was soon expelled for issuing a pamphlet in favor of the Hanoverian succession. When George I of Great Britain came to the throne in the following year, Steele was knighted and given responsibility for the Theatre Royal, Drury Lane, London. He returned to parliament in 1715, for Boroughbridge. While at Drury Lane, Steele wrote and directed the sentimental comedy The Conscious Lovers, which was an immediate hit. However, in 1719 Steele found himself in agreement with Lord Oxford regarding The Bill Of Peerage, and wrote: A LETTER TO THE EARL OF O--D, CONCERNING THE BILL OF PEERAGE. This pamphlet and Steele's subsequent speeches caused him to fall out with Addison and, in 1724, he retired to his wife's homeland of Wales, where he spent the remainder of his life.******