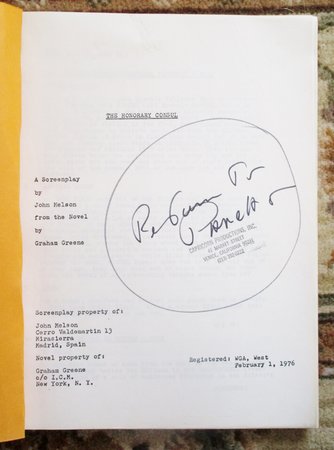 It appears that this 1976 draft was being produced by Capricorn Productions of Venice, California. The company name / address / phone stamp is on the title page. It also appears that this project was being shopped by PAUL KOHNER, a Hollywood Super Agent. Laid in is his handwritten note on his letterhead that states: "NO / (Returned?) by (??) / Not very high on it. / Do you still want / discuss with him?" Also in the hand of Paul Kohner is a note on the title page: "Return to Pamela" which is then circled along with the company stamp of Capricorn Productions.

This 1976 John Melson draft was apparently NEVER used. Capricorn Productions abandoned the movie project. Norma Heyman later took on the task of producing a film version of the book and another writer, Christopher Hampton, was brought in to write the screenplay. The title of the film was CHANGED to BEYOND THE LIMIT for its U.S. release, but retained the title HONORARY CONSUL for the U.K.

(Interesting Note: By producing the film The Honorary Consul, Norma Heyman, born 1940, became the first British woman to produce an independent feature film by herself.)

Photocopied on plain white paper (copy machine copies were, and still are, common among production and working scripts; drafts could be quickly made and sent to the film's writers, producers, directors, etc.), 8.5x11 inches, 132 pages printed on one side only, pages are 3-hole punched and bound in plain orange paper covers with 2 brass brads.

VERY GOOD condition, the covers have some light soiling and a couple marks, the top of the front cover has several paperclip indents and a small associated tear, otherwise the script is tight, bright, clean and unmarked.