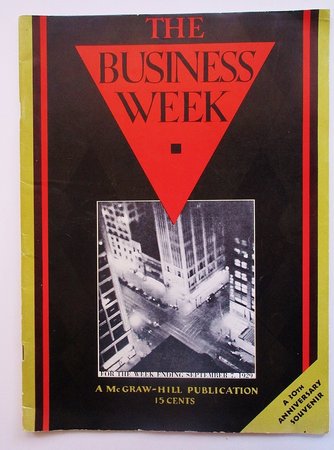 THE BUSINESS WEEK For The Week Ended SEPTEMBER 7, 1929 : A 30th Anniversary Souvenir Edition that Reprints in its Entirety the FIRST ISSUE OF BUSINESS WEEK. Published by McGraw Hill, New York, 1959. An exact reprint of the very first issue of Business Week that was published just weeks before the 1929 Stock Market Crash and the beginning of the long Great Depression. The only additions are a notation on the front cover that states: A 30TH ANNIVERSARY SOUVENIR, and a two page introduction to this anniversary edition. VERY GOOD condition, a crease to the upper corner, some spine creases, a bit of edgewear, overall tight, bright, clean and unmarked.