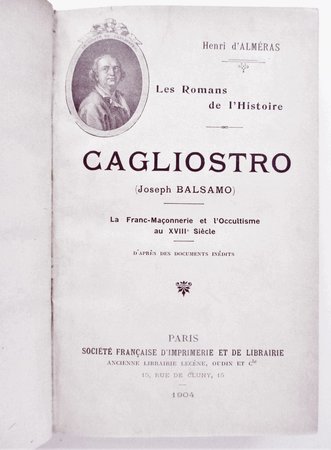 Condition: The front cover is disbound but present, the rear cover's spine fold is worn and tender but holding, the spine covering is chipped and peeling, the boards are worn at their edges and have some scratches and rubs. Internally, the pages are toned along their edges, there is a previous owner's signature on the first blank page, otherwise the pages are tight, bright, clean and unmarked.

A complete copy of this SCARCE 1904 work on the Freemason and Occultist, Cagliostro, by the noted historian Henri d'Almeras.

About CAGLIOSTRO (from Wikipedia):

Cagliostro was an Italian adventurer and self-styled magician. He became a glamorous figure associated with the royal courts of Europe where he pursued various occult arts, including psychic healing, alchemy and scrying. His reputation lingered for many decades after his death, but continued to deteriorate, as he came to be regarded as a charlatan and impostor, this view fortified by the savage attack of Thomas Carlyle in 1833, who pronounced him the Quack of Quacks. W.R.H. Trowbridge in his Cagliostro: the Splendour and Misery of a Master of Magic (1910), attempted a rehabilitation.

Portuguese author Camilo Castelo Branco credits to Balsamo the creation of the Egyptian Rite of the Freemasons and intensive work in the diffusion of Freemasonry, by opening lodges all over Europe and by introducing the acceptance of women into the community. Occult historian Lewis Spence comments in his entry on Cagliostro that the swindler put his finagled wealth to good use by starting and funding a chain of maternity hospitals and orphanages around the continent. Occultist Aleister Crowley believed Cagliostro was one of his previous incarnations.******