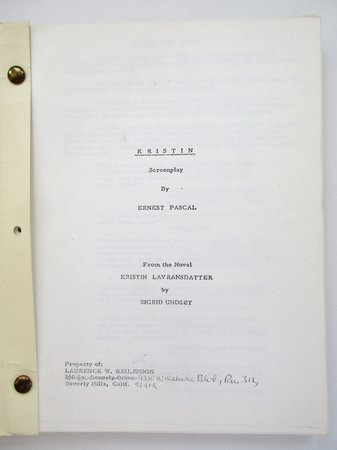 KRISTIN. Screenplay by ERNEST PASCAL. From the Novel KRISTIN LAVRANSDATTER by SIGRID UNDSET. The screenplay is undated but perhaps circa 1960 (Ernest Pascal died in 1966). The novel Kristin Lavransdatter was first published in 1921 and has been in print ever since. This screenplay by Ernest Pascal was never produced. The only film of the novel that I am aware of is a 1995 Swedish Film directed by Liv Ullmann. That film, in Swedish, has no relation to this screenplay. Photocopied on plain white paper (photo offset copies were, and still are, common among production and working scripts; drafts could be quickly made and sent to the film's writers, producers, directors, etc.), 8.5x11 inches, 170 pages printed on one side only, pages are 3-hole punched and bound in heavy stock yellow paper covers with 2 brass brads. VERY GOOD condition, the covers have some light soiling and edgewear, otherwise the script is tight, bright, clean and unmarked. RARE and UNUSUAL screenplay by ERNEST PASCAL of KRISTIN LAVRANSDATTER.