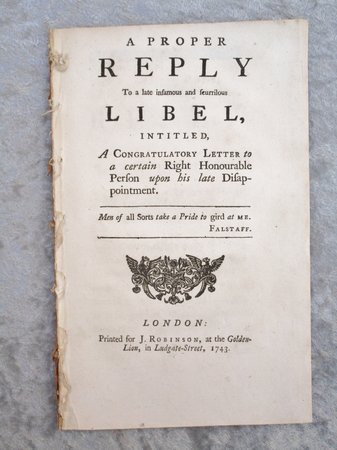 1743 REPLY to an INFAMOUS and SCURRILOUS LIBEL

A PROPER REPLY to a LATE INFAMOUS and SCURRILOUS LIBEL, Intitled, A CONGRATULATORY LETTER to a Certain RIGHT HONOURABLE PERSON upon his LATE DISAPPOINTMENT. Anonymous (but known to be WILLIAM PULTENEY). LONDON: Printed for J. ROBINSON at the Golden Lion, 1743. An anonymous (William Pulteney) reply to an anonymous (attributed to Henry St. John, Viscount Bolingbroke) pamphlet that directly, though not by name, disparaged William Pulteney after he (Pulteney) found he had not been granted the post of First Lord of the Treasury. Disbound, 5x7.5 inches, [2] + 28 pages. GOOD condition. Disbound, as noted above; lacks the half title page; there is some edgewear and some light foxing here and there; overall the pages are bright, clean, and clear.