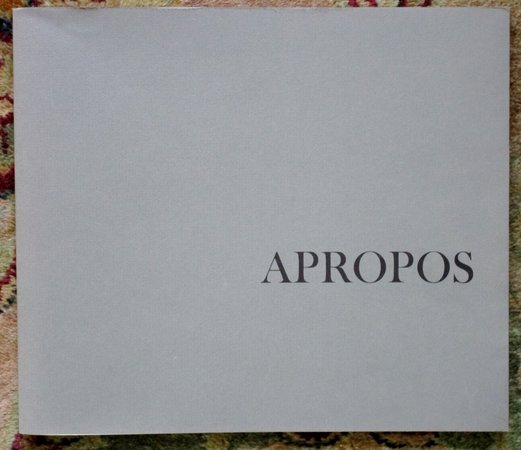 APROPOS. Exhibition Catalog. ART by ROBERT MOTHERWELL, PHOTOGRAPHS by RENATE PONSOLD. Accompanying text by Robinson Jeffers. SIGNED by both ROBERT MOTHERWELL, the ARTIST, and HIS WIFE, RENATE PONSOLD, the PHOTOGRAPHER. The SIGNATURES of both MOTHERWELL and PONSOLD are on the backside of the title page, the page facing a Motherwell print. Motherwell signed with a red pen, Ponsold signed with a black pen. First Edition. Limited to only 1500 copies, as stated. SIGNED copies of this limited edition of 1500 copies are hard to find. (In addition to the 1500 copy limited first edition there were 125 hardbound artists' copies produced for and sold at the exhibition, each with an original signed lithograph. The hardbound copies with signed original lithographs are very rare.) The exhibition catalog was produced to accompany the exhibition held at the Art Museum and Galleries of California State University, Long Beach. The exhibition was held from October 5 through November 1, 1981. Printed wrappers that loosely wrap around the plain white covers of the sewn bound inner pages, like a dustjacket; 12 x 14 inches oblong, 51 unnumbered pages. Illustrated with 19 photo lithographs of Robert Motherwell's drawings, most in b&w but a few with orange, yellow and/or blue colors; and 21 reproductions of photographs by Renate Ponsold Motherwell. VERY GOOD condition. There is a 2" x 1" area of light creasing to the wrappers front panel at the top margin near the spine, and to same place on the inner white front cover; there is some associated wear to the top of the wrappers' spine, and there are 2 very small associated closed tears near the top of the inner covers near the spine; the wrapper and inner cover have a bit of wear to their upper front corner; there is a small crease to the very tip of the upper corner of the last 26 pages. Overall a solid, very nice copy, with wrappers that are bright and sturdy, inner pages that are tight, bright, clean and unmarked, illustrations that are lovely, and signatures that are brilliant. Robert Motherwell, b. 1915, d. 1991, was one of America's Great Modern Artists.