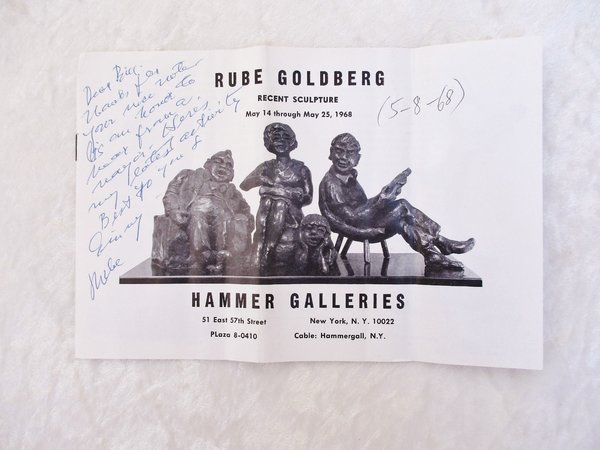 Catalogue of Recent Sculpture by RUBE GOLDBERG at the Hammer Galleries, New York City. The exhibition took place from May 14 through May 28, 1968. Published by the Hammer Galleries, 1968. SIGNED and INSCRIBED by RUBE GOLDBERG on the cover in blue ink: "Dear Bill / Thanks for your nice note. It's an honor to hear from a (mayor?). Here's my latest activity. / Best to you and (Ginny?) / Rube". Thin booklet, paper covers, side stapled, 5.5x8 inches oblong, 8 pages including covers. Illustrated with the sculptures of Rube Goldberg. FAIR condition, numerous vertical folds and associated creases from being folded up into a small size, signs of handling, the date 5-8-68 is written on the front cover; nonetheless a solid copy that is still bright, clean and clear. At the age of 80 Rube Goldberg abandoned his career as a cartoonist and turned to sculpture. This was the first solo exhibition of his sculpture, held when he was 85. Two years later Rube Goldberg died. SCARCE with RUBE GOLDBERG'S HANDWRITTEN INSCRIPTION and SIGNATURE. About Rube Goldberg (excerpted from Wikipedia): ******Reuben Garrett Lucius "Rube" Goldberg (b. 1883 d. 1970) was an American cartoonist, sculptor, author, engineer, and inventor. He is best known for a his popular cartoons depicting complicated gadgets and machines that perform simple tasks in indirect, convoluted ways. Goldberg received many honors in his lifetime, including a Pulitzer Prize for his political cartooning in 1948 and the Banshees Silver Lady Award in 1959. Goldberg was a founding member and the first president of the National Cartoonists Society, and he is the namesake of the Reuben Award, which the organization awards to the Cartoonist of the Year. He is the inspiration for various games, including the 60's MOUSETRAP, and for international competitions known as Rube Goldberg Machine Contests that challenge participants to make complicated machines that perform simple tasks.******