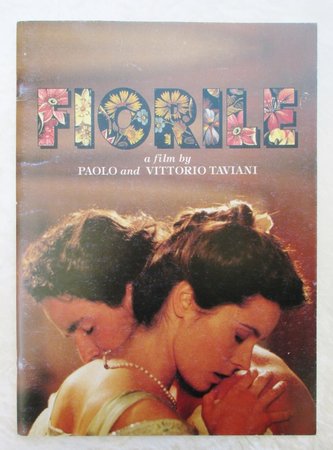 FIORILE - MOVIE PROMOTIONAL BOOK - SIGNED by both DIRECTORS PAOLO TAVIANI & VITTORIO TAVIANI. Softcovers, side stapled, 9x12 inches (23 x 31 cm), 32 unnumbered pages. Printed by Graphic Design Consultants, Rome, (1993). This promotional film book provides a synopsis of the film, a brief bio and interview with the directors Paolo and Vittorio Taviani, and biographies and/or filmographies of the film's main cast and crew. Illustrated with b&w film stills of some of the cast members. The text is in English. Fiorile is a 1993 Italian film about a family curse caused by greed. The film was directed by the brothers Paolo and Vittorio Taviani, and stars Claudio Bigagli, Galatea Ranzi, Michael Vartan, Lino Capolicchio, and Constanze Engelbrecht. It was entered into the 1993 Cannes Film Festival. VERY GOOD condition, the covers have some rubs and finger marks, creases at the spine, and light soiling to the white rear panel, internally very nice, tight, bright, clean and unmarked. A solid, attractive copy. PAOLO & VITTORIO TAVIANI are great Italian Film Directors; their SIGNATURES make this film promo book special. About Paolo and Vittorio Taviani (from Wikipedia): ******Paolo and Vittorio Taviani (b. 1931 and 1929) are noted Italian film directors and screenwriters. They are brothers, who have always worked together, each directing alternate scenes. At the Cannes Film Festival the Taviani brothers won the Palme d'Or and the FIPRESCI prize for PADRE PADRONE in 1977 and Grand Prix du Jury for LA NOTTE DI SAN LORENZO (THE NIGHT OF THE SHOOTING STARS, 1982). In 2012 they again received the top prize in a major festival, winning the Golden Bear at the Berlin International Film Festival for CAESAR MUST DIE.******