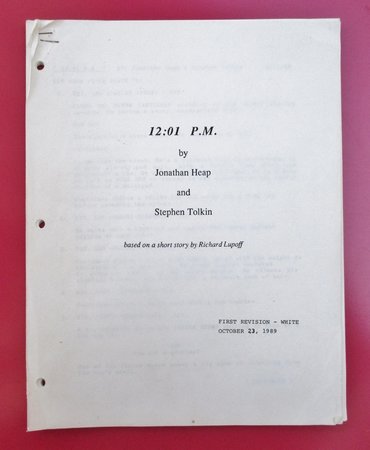 12:01 P.M. First Revision SCREENPLAY by JONATHAN HEAP and STEPHEN TOLKIN. Based on a Short Story by RICHARD LUPOFF. 12:01 P.M. is a short film based on the 1973 science fiction short story by Richard Lupoff. It was first shown in 1990 and was nominated for an Academy Award. Many believe that Groundhog Day stole the idea for its film from 12:01 P.M. A different film based on the story 12:01 P.M. was released in 1993. Copy machine printed on plain white paper (photocopied drafts were, and still are, used for production and working scripts because they can be easily made and quickly sent to a film's writers, producers, directors, etc.), 8.5x11 inches, 3 hole punched but bound with staples at the upper left corner, 25 pages plus title page, pages printed on one side only. GOOD MINUS condition, the pages are creased at all their corners, the title page is creased with some small tears along its left edge, there is wear around the two upper staples including some extra staple holes and staple impressions, the last page has pulled from the staples (i.e. is loose), otherwise a complete, clean, clear copy. SCARCE FIRST REVISED DRAFT of this groundbreaking science fiction short film. It is the only copy I have and the only copy I have ever seen. About the 1990 film 12:01 P.M. (from Wikipedia): ******12:01 PM is a 1990 short film starring Kurtwood Smith. Directed by Jonathan Heap, it originally aired on cable television in 1990 as part of the Showtime 30 Minute Movie anthology series. It was nominated for an Academy Award.

It is the first film adaptation of the short story "12:01 PM" by Richard A. Lupoff, which was published in the December 1973 edition of The Magazine of Fantasy and Science Fiction. The major plot device is a time loop or time bounce, and bears great similarity to that of the 1993 film Groundhog Day. Lupoff and Jonathan Heap, director of the 1990 film, were "outraged" by the apparent theft of their idea, but after six months of lawyers conferences and substantial expenses, they decided to drop the case against Columbia Pictures. In the 1990 film, Kurtwood Smith plays Myron Castleman, an everyman stuck in a loop that forces him to constantly relive the same hour of his life over and over, being the only person aware of this. During one loop, he discovers that a scientist named Nathan Rosenbluth has predicted an event that matches his experience. Castleman calls him and explains what is going on, however, Rosenbluth is highly skeptical of his claims. Over the next loops, Myron struggles to get into contact with Rosenbluth again, and in the process becomes frustrated to the point of screaming at his secretary and throwing his suitcase into traffic. Eventually, he does manage to talk to Rosenbluth, who initially dismisses Myron as crazy until Myron describes the transition as the scientist had predicted (including the phrase "Consciousness is an independent variable," which is central to Rosenbluth's theories). The professor sadly informs Castleman that there is nothing that can be done, causing Myron to become hysterical and shoot himself. There is a brief pause until Myron finds himself back at the beginning of the loop, realizing that he is trapped for eternity. This version has NEVER BEEN RELEASED ON DVD IN THE U.S. In the 1993 film the main character keeps reliving the same 24 hour period (which in this case restarts at one minute past midnight, rather than midday as in the other versions). This version differs from the 1990 film in that it features a much lighter and more comedic tone, and that the protagonist ultimately finds a way to correct the time loop over the course of the film. This version was released on DVD in the United States on November 28, 2006.******