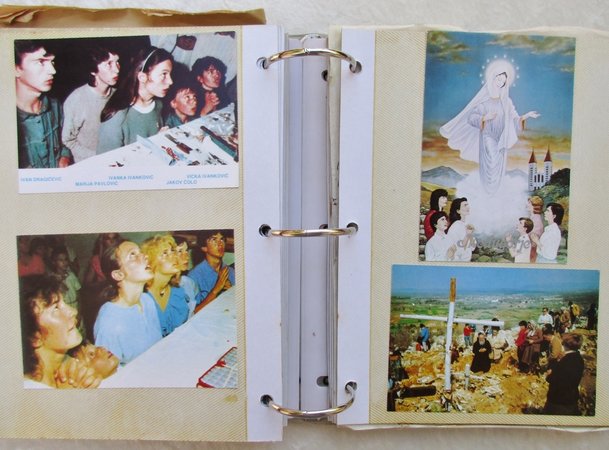 PHOTO ALBUM / SCRAPBOOK, filled with color snapshots, some booklets and other paper ephemera from a 1987 trip, likely by a U.S. Slavic Church group, to Yugoslavia. There are 26 leaves (52 pages) in the album, with photos (and some paper ephemera) pasted onto both sides of the leaves. Most pages have 3 or more 3.5x4.5 inch snapshots, some have booklets or other paper ephemera. There are a total of 115 snapshots. The first 21 photos are of the church group at a Pope's mass at an outdoor stadium somewhere. The photos are of the the crowds at the stadium mass, members of the church group, and other scenes at the stadium. Next comes a large photo postcard of Zagreb captioned with a handwritten note stating "Zagreb / First city for us in Yugoslavia". Then begins a large section of photos and some ephemera related to the group's visit to Medjugorje. Their stay in Medjugorje seems to have been the main purpose of the trip. There are 45 snapshots and several pieces of paper ephemera. The snapshots are accompanied by the following handwritten notes: ******Our group and first views of Medjugorje; Family dinner at Medjugorje, three Fathers one Sister, Jesusa and her Mother; Medjugorje Parish Church, Father McDonald of our group from San Francisco and others behind organ and beneath choir left of Apparitions; Chinese Mass in Apparition Room at Church with Mary giving the Hail Mary; VISITING THE VISIONARIES VICKA AND MARIJA AT THEIR HOMES; Andrej Subie took us to visit. He is translating for Vicka and Marija; Our host family and our home in Medjugorje.****** Next come snapshots of the group in Dubrovnik, with scenes of Dubrovnik including ancient sites and modern tourist beaches. Then some photos of Mostar, more pictures of the group, a photo card of a bush with a miraculous appearance of the Virgin Mary which "was shown to the children in Medjugorje, Yugoslavia, and it was confirmed as true". Then a few photos of buildings on Lopud Island. Quite an interesting album, especially so since the snapshots were taken in 1987, only a few years before the Yugoslavian Civil War (the Yugoslav War) which began in 1991 and devastated the former Yugoslavia for the next ten years. Condition: The album is sturdy, the photos are bright and clear, the photos and ephemera are glued on to the album pages and cannot be removed, the thin plastic covering to the album pages is sometimes torn or missing but that does not affect the items on the album pages. INTERNATIONAL BUYERS PLEASE NOTE: This is a large, heavy photo album, that will require substantial additional shipping charges. After placing your order you will be notified of the additional charges and be able to accept or reject them before your payment is processed. Thanks.