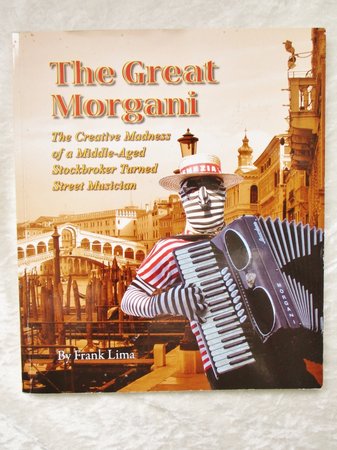 Frank Lima aka The Great Morani

THE GREAT MORGANI : The CREATIVE MADNESS of a MIDDLE AGED STOCKBROKER TURNED STREET MUSICIAN. By Frank Lima (aka The Great Morgani). SIGNED and INSCRIBED by THE GREAT MORGANI on the half title page: "Dear Richard / I hope you get a lot / of laughs and giggles from my / book. / Frank AKA / The Great Morgani / Accordionist". Self Published, Santa Cruz, California, 2007. Softcovers, French folds, 70 pages. Illustrated throughout. VERY GOOD condition, a bit of wear to the spine and cover edges, otherwise tight, bright, clean and unmarked. A solid, very nice copy. About The Great Morgani (from Wikipedia): ******The Great Morgani (aka Frank Lima) is an American street performer and performance artist from Santa Cruz, California. Although he is an experienced accordionist with 60 years of experience, he is most noted for his spectacular costumes. Frank Lima was born in 1942 in Los Banos, California. His family moved to Santa Cruz in 1946. Lima started performing at age 11, mostly in trios at Portuguese events. He enjoyed success in his first career as a stockbroker, but retired when he was 35. Almost two decades later in 1995, he embarked on a second career playing accordion as a street performer. In the first few years of his street performing, he performed with his face uncovered. Gradually, he developed more elaborate costumes, relying on the sewing skills he learned from his mother, a master seamstress. Although he performs barefaced privately, he performs in public with face covered, often by the material used in the rest of his costume. He has collected 42 accordions and assembled more than 130 costumes. In February 2014 Lima announced his retirement from street performing in downtown Santa Cruz due to city ordinances that regulate artists.******