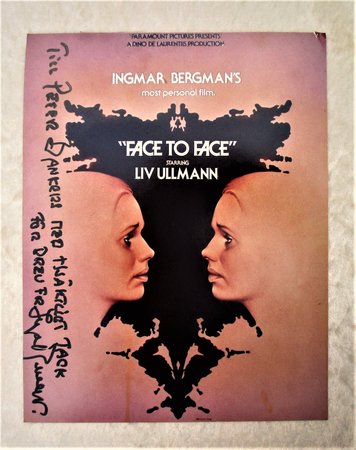 FACE TO FACE (Swedish: Ansikte mot Ansikte) 8x10 inch film promotional photo (a reduced reproduction of the film's poster) with the ORIGINAL SIGNATURE and PERSONALIZED INSCRIPTION of INGMAR BERGMAN, the film's director. The inscription is not dated but is likely circa 1976, the year the film was released. This 8x10 inch poster repro is printed on Kodak photo paper. HAND SIGNED and INSCRIBED in SWEDISH by INGMAR BERGMAN in black felt pen on the left margin of the photo. The inscription reads: "TILL PETER DANKERS MED HJÄRTLIGT TACK FÖR DREV FR (Från) INGMAR BERGMAN". The English Translation is: "TO PETER DANKERS WITH HEARTFELT THANKS FOR THE DRIVE FR (from) INGMAR BERGMAN". INGMAR BERGMAN'S SIGNATURE is RARE, his INSCRIPTION very much so, and his INSCRIPTION in SWEDISH is both rare and incredible, imho. VERY GOOD condition, the upper front corner tip is creased and starting to peel, there is a 2 inch piece of clear tape on the backside near the top edge, otherwise solid and bright. Would look amazing matted and framed. INGMAR BERGMAN, b. 1918 d. 2007, was one of the greatest film directors of all time. You can read about him and his films all over the Internet. We fully guarantee the authenticity of signed items we sell.