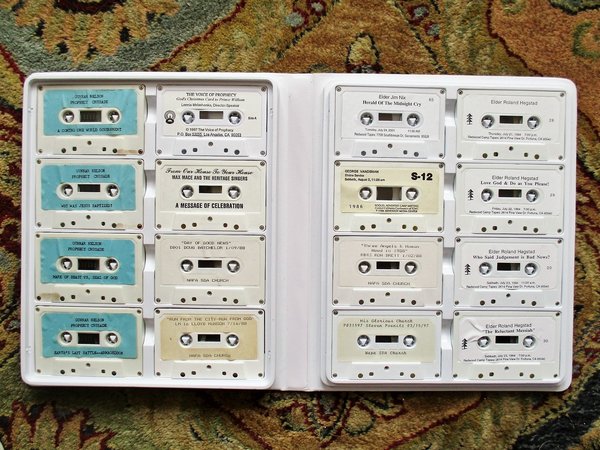 REDWOOD CAMP MEETING, NORTHERN CALIFORNIA CONFERENCE OF SEVENTH DAY ADVENTISTS. A collection of 16 cassette tapes. Plastic folding clamshell case filled with 16 cassette tapes of sermons and lectures. These were, perhaps, given (or sold) to the camp participants and listened to at the Seventh Day Adventists Camp Conference that took place in the year 2000. (Though the camp conference took place in 2000 the tapes show that they were recorded mostly in the 1990s. One tape has a date of 2001 that may have been added later?) 16 cassette tapes. I do not know the playing time of the tapes. Tape titles include: MARK OF BEAST VS. SEAL OF GOD; EARTH'S LAST BATTLE : ARMAGEDDON; LOVE GOD & DO AS YOU PLEASE; WHO SAID JUDGEMENT IS BAD NEWS; THREE ANGELS & HUMAN NEED; and many more. The tapes all appear to me to be in GOOD condition, though the labels have bubbled. I have tested several and they played fine. I have provided photos that show exactly what tapes are in the folding case.