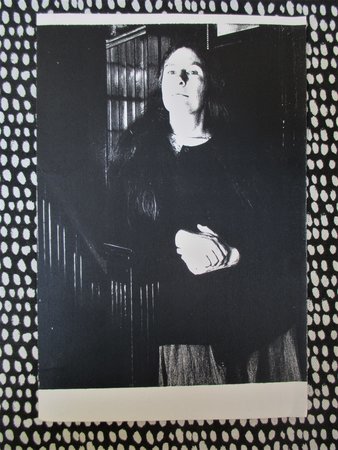 CAROLYN CHUTE Photo INSCRIBED to her PUBLISHER re: Wanting to Look SPOOKY LIKE STEPHEN KING 1994

Carolyn Chute, 6x9 inch Photograph, Inscribed in Her Hand on the backside, Inscription clearly meant for her Publisher or Editor. Photograph undated but circa 1993 or 1994 as it refers to her yet to be published book MERRY MEN that was published in 1994. The handwritten inscription reads: "I think I'm using this one for cover of Merry Men. I want to have a spooky image like Stephen King. Not to mention an update. TEN years has past since the other one." Carolyn Chute's first book, The Beans of Egypt Maine, came out in 1985, thus the reference to her photo on that book (i.e. "the other one") being ten years past. She clearly did not want the same photo on Merry Men, her second book. VERY GOOD condition, just some light creases from handling. Comes with a second copy of the same photo, this one without an inscription. Would look great mounted together in a frame.